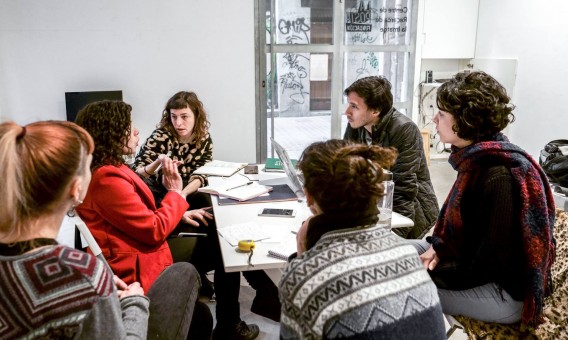 LABi (Laboratory of thought, creation and diffusion of the image), is a project of the Master in Photography, Art and Technique of the Polytechnic University of Valencia in collaboration with La Posta Foundation – Image Research Center. For this season, exhibitions, workshops and participatory activities are planned to intensify the relations of the LABi with the neighbors of the neighborhood.

Coordinated by the students Karol Hincapié, Gabriela Rivera Lucero, Andrés Holguín, Gabriella Falcone, Estíbaliz García Taboada and Dolors Fabra Antón, is defined as a space in which to experiment and investigate new ways of studying and understanding the image in connection with the citizen needs.

The first exhibition “Suspended places” includes works by Pepa L. Poquet and Pau Figueres in which the last transformations of the city are influenced and the influence on their definition of the various neighborhood movements. In addition, in its willingness to spread throughout the neighborhood, the exhibition includes a visit to the March workshop in Mare Vella Street, a “suspended place” that has resisted several demolition plans, and an exhibition of postcards itinerant for public spaces, open to the participation of the people, for which a public call has been made, from December 21 last until January 31, 2019. You still have the opportunity to participate, sending your photo along with your name and social media data to the mail labi@masterfotografia.es