The supposed neutrality of geographical knowledges has at best proven to be a beguiling fiction and at worst a downright fraud. Geographical knowledges have always internalized strong ideological content. In its scientific (predominantly positivist) forms, natural and social phenomena are represented objectively as things, subject to manipulation, management and exploitation by dominant forces of capital and the state.

Spaces of Capital: Towards a Critical Geography, David Harvey.

The effects of modernity still survive in our time. Currently much of the artistic practices focus their activities on various research that demand revision more than necessary for a holistic project that is no longer perceived as positive as before. Modernity has ceased to be a nostalgic mirror to find a reflection that she could not refund at the time. Such effects of the modern project, one that has more force is the binary division between nature and culture. A segmentation is revealed as one of the many fictions of human knowledge that while abstraction needs the watertight compartments that organize each of their disciplines, can not be understood without a close link between culture and nature. Indeed, the boundary established by modernity between the two spheres is almost a reality that, today, is seeing also deteriorate the layer of neutrality that has accompanied throughout the twentieth century. The defects of modern reason, however, remain in our present.

The work of Regina de Miguel (Málaga, 1977) is no stranger to this review of the effects of modern project in our contemporary world, focusing on the analysis of different knowledge produced by scientific knowledge from an attitude that links two seemingly opposite terms: the critical fascination. Attitude incorporating an aesthetic interpellation to this proliferation of knowledge that is necessary to remove the drill autonomy which have been constructed historically low specific interests. Knowledge is not something external to what individuals access. It is a mechanism of production of world and subjectivity caused by the overlapping of numerous interferences, some of which practice a strategic invisibility. 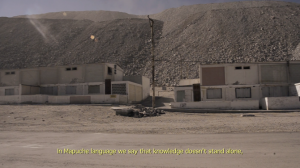 Knowledge never comes alone, Regina de Miguel, is an audiovisual work that demonstrates how hybrid is a constitutive quality of knowledge whose production is not impartial or independent. Subject to certain geopolitical and socioeconomic conditions, knowledge is a tool of power, which in turn derives from power. Compared to other areas of knowledge that are implicit criticism processes and are aware of its political dimension in society, scientific disciplines have built their stories with an independence that, in addition to safeguarding an illusion of autonomy from the fact that the supports and encourages, have managed to exclude from its field of critical reception to those who are not professional scientists. One could say that, when interacting with science from an outside, do not yet have the right to a critical dilettantism. Facing a kind of artistic practice that only works as a host of scientific knowledge, the work of Regina de Miguel proposes a new relationship with the scientific discipline through art: the artist who, out of their comfort zone to transit for areas that initially are foreign, get interrupt line between epistemological spaces. And turn the outsider at that legitimate science dilettante who does not yet possess.

Taking as a focus of study a particular area of geography, the Atacama Desert, this visual essay builds a story in which different knowledge located in one of the most extraordinary cross territories worldwide. The extreme conditions of all desert territory, which prevent its habitability and the proliferation of life forms help a conception of it from the world. Like the deserts not take with all the problems of those other territories which are explicitly related to our social architecture. Under the echoes of anachronistic binary paradigm, the desert belongs to nature while we belong to culture.

As Regina de Miguel demonstrates this audiovisual essay not only certain conceptions of knowledge are becoming obsolete. Also the notion of the artist as individual professional who works in the field of (re) presentation. Knowledge never comes alone is just one example of the exchange of roles by an artist who, before reaching an aesthetic conclusion, appropriates the functions and methodologies from other disciplines. This project can not be understood without the prior research process by the artist who, visiting various locations in the northern part of the Atacama Desert, links different points for mapping of specific knowledge that the territory possesses and produces. The driest desert in the world is a space of conflict that has entered the history of Chile and all its political ruptures since the Spanish conquest. Also a geographical area its high atmospheric visibility conditions have become an access door to the universe by astrophysical and cosmological research. 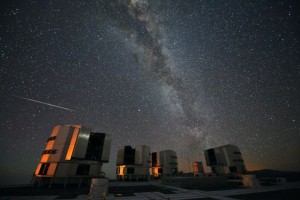 Starry sky from Atacama in timelapse

As in the universe is contained all the information of our past, in Atacama is hidden past information of some indigenous communities in Chile, communities who have no interest in their own heritage. This heritage, which could be restored by archaeologists, the possibility remains when archeology cares more about its scientific character than political potential. At the same time, parts of northern Atacama hardly been explored, described or documented. The nomadic condition of their people has made the industry input was late and instrumental, opening the way to a posteriori have revealed that the desert has been able to generate new forms of life previously unknown types of plants. Construction of the Astronomical Observatory of Paranal (ESO) Atacama becomes an international territory within which the Chilean bound is lower than that of other countries and where astrophysical research, looking into space, isolated from the place that allows its development. The study of dark matter, creating a map of the universe using gravitational lensing and production of simulations of the universe are some of the main focuses of action Paranal Observatory. While our approach to the universe is unfailingly by scientific knowledge, there -also within Atacama- other forms of knowledge about the universe that do not pass through the scientific institution. Knowledge of the Mapuche community is one of them, a society in conflict with a state (Chile) that was appropriated their holy places.

Knowledge never comes alone builds a hybrid account of overlapping knowledge, however, apparently independently develop in the geography of the Atacama Desert. Forms of knowledge that are subject to a landscape that marks the development of the work of archaeologists, historians, engineers, astrophysicists and cosmologists. The explicit crossover occurs between past, present and future in Atacama becomes the specifics of this territory in an extraordinary paradigm when analyzing the connection between knowledge and policy context spanning production and construction stories really linked to learn. The map of Atacama proposed Regina de Miguel is not a geographical or epistemological presentation of a particular place: the search for a comprehensive approach to understanding, from further analysis, the isolated spheres of human knowledge is a cultural construction and historical serving interests that often transcend.

Comments from a visitor to the exhibition