The work of Denis Ponté it stops at the Nomadic Community Garden in London and brings us closer to a community experience that reminds us, for a moment, of the Christiania of Copenhagen, but its most important virtue is that it highlights the persistence in the time of forms of life in common whose organization does not revolve around paid work, as is the case of the community —whose members are constantly renewed, but which remains as such— of graffiti artists and all kinds of artists existing in Nomadic Community Garden.

From another series by Denis Ponté “Left for Dead”, made in New York in 1994, we have selected a photograph in which the urban space of nomadic life appears in the foreground. Both in this and in the other photographs (and especially the one of the graffiti artists under the bridge), it becomes clear that urban life takes place in urban spaces that are spoiled, without a clear use, as is the case of the spaces that appear under the bridges of urban infrastructures, or in the large paved surfaces that appear in cities that are neither sidewalks nor squares, the result of the application of the standards of empty space proportional to the buildable area, which when the buildable area grows a lot, gives give rise to empty spaces without a clear use, which, together with the constant decrease in the number of pedestrians because mobility has been replaced by transport by private vehicle, especially in the suburbs, ends up creating the perfect scenario for the development of the nomadic life. 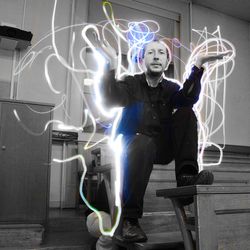 A photographer who combines his work in the studio with his teaching activity at the University and his travels around the world, capturing what his eyes see in a very direct way. Says Serge Desarnaulds (actor of Jean Luc Goddard and writer): “A photographer whose commitment is manifest in many of his works (Left for Dead, 1994; Au bord du monde, 1995; Histoire de vivre, 1998; Face à elle, 2015). That commitment, artistic and social at the same time, marks a recognizable independence of spirit and ethics, together with the responsibility of their work, as well as the freedom to create without fitting into a limiting economic framework and outside of any institutional affiliation that could reduce your demands. That attitude has its price and is worthy of admiration. These various aspects make him an artist whose talent has been highlighted, especially when his images have as their theme the portrait or the natural and social environment observed during a trip. […] Few words are needed to designate this talent: a gift that knows how to capture the emergence at the right moment, that is to say, at that unexpected moment that we always wait for and that we will continue to wait for a long time since the fleetingness of the impression appears and reappears.