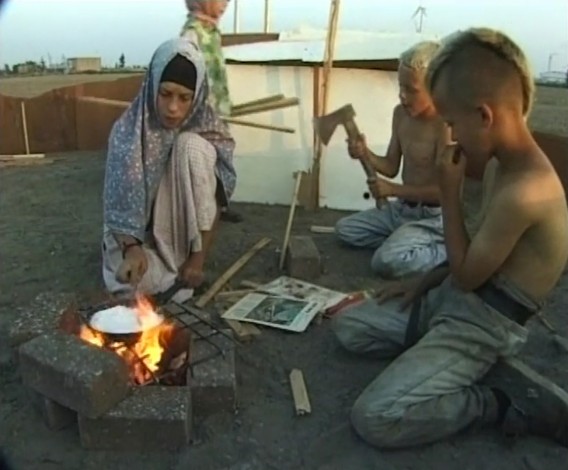 The Joost Conijn’s work “Siddieqa, Firdaus, Abdallah, Soelayman, Moestafa, Hawwa en Dzoel-kifl” (40′, 2004), which could be seen at the 2012 Paris Triennale, “Intense Proximité”, in the Palais de Tokio, it is a video work that shows the life of a group of children in a wasteland on the outskirts of Amsterdam. Although the first thing that stands out is that during the whole day there is little presence of their parents, and they are not abandoned, but this is not the most relevant, but the fact that, although they are there, they could be anywhere else. Nothing suggests that this is his permanent residence, and not because it is precarious. It’s all extremely provisional. The children build their instruments for the game with what they find in their path. But they are there doing it with great intensity, with a great mastery of space, not as someone who is uprooted. In short, as nomads.

Claire Staebler says, in the 2012 Paris Triennale Exhibition Guide “Intense proximitè”, where this audiovisual was shown under specific conditions (in the expansion in the basement of the Palais de Tokio): “Conijn puts his camera and it simply takes that childish energy from the source, forcefully and simply questioning cultural belonging, religion and authority, while pushing the boundaries of tolerance and integration.” Indeed, the borders of tolerance are being forced. These kinds of works that make life the raw material for an artistic experience inevitably raise issues of legitimacy (if not directly legal issues), particularly in relation to the use of the lives and images of others. So much so ―that there is always that tension and those problems― that, according to the website of the Franz Hall Museum, in Harlem (The Netherlands), in whose collection is the Joost Conijn audiovisual that we commented: “Not long after the premiere of the film, the politicians in Amsterdam would intervene and Bureau Jeugdzorg would take the children from their father and take them out of their home.” 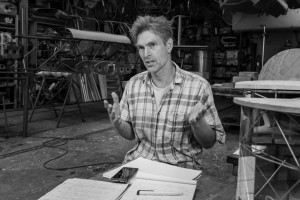 His activity unfolds halfway between technology and art. He is an inventor and adventurer. Among other things, he has built airplanes, using bicycle parts. The first crashed shortly after takeoff, but with the second it traveled to Kenya. He has toured various countries in Eastern Europe with a vehicle made of wood that runs on gas generated by the vehicle itself. He has made movies narrating these adventures. Among others, one about his trip by bicycle through Morocco with two friends.

His works and vestiges of his adventures and his inventions are in the collections of the Franz Hall Museum in Harlem (The Netherlands) and in the Museum Boijmans Van Beuningen in Rotterdam. His works and experiences have been shown in art spaces around the world: Royal Athenaeum of Antwerp, in 2017; Kyoto Municipal Museum of Art, in 2015; 13th Istanbul Biennial and Biennale of Sydney in 2014; Museum Volkenkunden Leiden (NL) in 2013; Kröller-Müller “Art Cars” Utrecht and Triennale de Paris “Intense Proximité” in 2012; Matadero Madrid in 2009; WORLD MAP ’08 Pamplona in 2008; Cobra Museum (Solo exhibition), Amstelveen (NL) in 2005; Miro Foundation (Solo exhibition), Barcelona, in 2005; etc.

Joost Conijn has inspired the character of the protagonist of Tommy Wieringa’s novel: Joe Speedboat, edited by De Bezige Bij [The Busy Bee], 2005. Which has won countless awards. Although Joost Conijn distances himself from the matter saying that anyone who knows me knows that there are notable differences with Joe Speedboat.