Within the VI edition of Cinema to come, it is screened at Fundación La Posta

Last film by Chus Domínguez, a work on Spanish colonialism in Morocco

Between 1947 and 1949 the photographer based in the Canary Islands Bonifacio Hernández Gil made numerous photographs for the army and the colonial administration of the so-called Spanish West Africa. In his images appear new cities as scenes of science fiction movies, surrounded by the desert and half-empty, prepared to welcome the new man that the regime designed.

The film has been seen at the following festivals:

What follows is a text by Miguel Maestro on the film by Chus Domínguez “Las ciudades imposibles” published on his blog. 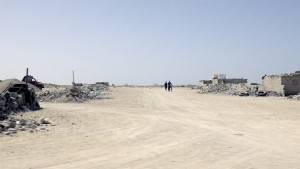 In “Field Notes” by Catarina Botelho we attended a side trip, from a movement on board a vehicle, a train in particular, that took us from the fields of Portugal to the desert, accompanying a dialogue between two women who placed the context and the fears generated by the country’s economic crisis. In “Las ciudades imposibles” by Chus Domínguez, the formal skeleton of the filmed images is reproduced, he accepts that form of dialogue between word and image to go something further. While the Portuguese film spoke of the most immediate present, the Spanish film uses the present to reveal the past, in this case the Spanish colonial past in the territories of Sahara and Sidi Ifni. If the excuse is to use the old photographs taken by Bonifacio Hernández between 1947 and 1949 in the Spanish settlements of the colonial zone, photographs that are introduced as landscapes almost without figures in the prologues of each chapter, appearing in a revealing negative those portraits of military and families destined to maintain an old and outdated imperial yearning, the final result produces an effect of disconsolate on the little effective role played by the settler in the area, all this caused by the undoubted racism and consideration of racial superiority demonstrated by the invader.

How can we transfer that sense of moral superiority to images of the present with photographs from the past? With the word, but not any word, not a word invented as a script, but through the word written by the military, politicians, officials, assigned to the area or, simply, in passing, a topical word and that reflects both the eagerness to dominate, or better said, to tame, the original inhabitant, as to uproot their customs and way of life. Nothing more complicated than holding the desert Berber, and for that you have to control it. Building settlements with minimal living conditions is the first step to try to convince the Berber that his days in the desert have to end. In this effort to concentrate the Saharawi population, make grow in the middle of nowhere, and near the sea, cities such as El Aaiún, Villa Cisneros, La Güera, Djala, impossible cities that obey the idea of offering a hypothetical guarantee of water and food that contains the reality of a simpler and more effective military control, a better repression, the introduction of Castilian as a language, religious influence, the change of habits to domesticate what is considered, from the official, a dangerous, hostile race, aggressive and that from time immemorial has put in check the Spanish troops displaced to the place.

The estrangement produced by that word comes from the genius of the idea with which it is expressed; we see the old photographs of the late 40s, and on board a vehicle we go through the interior of those cities, or their exterior, as small as they are, passing in front of buildings, shops, people, parks, squares, ruins, poverty in definitive with an omnipresent Moroccan flag that recalls our shameful withdrawal from the place without ensuring the freedom of the Sahrawi. That transient and fleeting image, taken laterally, begins to share the space with the word after our eyes have been made to the conceptual idea of the trip, but the written word is not read in Castilian, but in Arabic, and in Arabic we hear these ideas of subjugating, domesticating, educating, differentiating, changing, all to make the Spanish presence more comfortable and stable, with a final objective, do not retreat in colonization so that the tribal idea of the bloody savage is not retaken, that is to say, eliminate freedom as a possibility for the future. The Spanish past disappears in the form of impossible cities that, in the long run, have ended up facilitating the Moroccan colonization with the same purpose of the Spanish, diluting the strangeness in the proper to subtract identity. 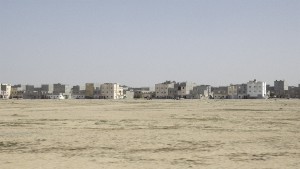 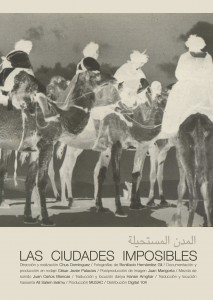