In relation to the impression that we have today (01.22.2021) of a profound transformation in the audiovisual field, what we can see when we go down to detail is that this transformation is measured in the constant unfolding of new types of screens, that imply new physical and spatial visualization conditions. If it turns out that the paradigm of audiovisual for a century had been the cinema, with a typical viewing in the dark room, a room of variable dimensions (from the great coliseums of the golden age of Hollywood, to the very small movie theaters of experimental cinema), but, in any case, with a single screen and a single programming. From there it went to multiplexes, with multiscreens and multiprogramming, at the time when, to the competition of television, the videoclub were added. On the other hand, in the domestic sphere, once the television screen was implemented, when the tape recorder and videotape became popular, the opportunities for audiovisual representation multiplied exponentially. Since then, screens have not stopped multiplying both at home and outside of it, a phenomenon also favored by other technological changes. If before those screens were illuminated by an interior lamp that projected the light towards the outside, with a power that, with difficulties, allowed the viewing of the image if it had to compete with direct natural light —so at the beginning of use TV users were still trying to reproduce the ideal dark room conditions in the home space—. However, then plasma screens have appeared that allow the viewing of the image in any circumstance; and the screens have been multiplying. A phenomenon that has been overwhelmed by smart mobile phones, with which we can access at any time and in any circumstance and place (be it the domestic environment, or at work or even in the public toilet), to any type of audiovisual.

In this context, what began to be known as video art (the audiovisual foreign to that world, exhibited in an art gallery), a specialty to which it has been added later, as a result of a theoretical reflection on the medium, the creative documentary and, in recent times, artistic cinema (which already existed long before —conceived as such since the sixties of the last century— but now it is understood that as such artistic cinema can enter the museum and can be exhibited in the same conditions as video art). All this has configured an audiovisual ecosystem with its own characterizing profile, which has found, as the most appropriate means for viewing in optimal conditions of enjoyment, a dark room reborn nestled in the space dedicated to the plastic arts.

It did not seem easy that this conclusion could be reached, because technically the dark room is not necessary, because today plasma screens offer enough luminescence to be seen even in extreme light conditions (as happens for example with OLED screens, whose technology incorporates self-luminescent organic material in each pixel). However, there was another issue that the museum or art gallery had not resolved, in relation to viewing audiovisual works in optimal conditions —the entire audiovisual ecosystem that had accessed this institution (be it video art, creative documentary or artistic cinema, including essay cinema—). We are referring to the different viewing times of audiovisuals in relation to other images offered to the public in these art spaces. The reception and enjoyment of the audiovisual requires a time, no matter how much you want to shorten its duration, which breaks the rhythm of the visit to the plastic arts space, which due to its characteristics and an ingrained custom, occurs at a considerably fast. Bear in mind in this regard that, in general, the public dedicates to viewing each of these plastic images as little as a few seconds, in some cases a little more than a minute. On the contrary, the audiovisual requires more time. In some extreme cases, uninterrupted hours and hours, as occurs, for example, with the works of one of the artistic film specialists for the museum, such as Aleksandr Sokurov, whose film Spiritual Voices (1995) lasts 328 minutes, and it has been exhibited at MACBA together with Confession (1998), 208 min 38 s, and Soldier’s dream (1995), 10 min 40 s. Regardless of whether there are those who think that this type of cinema has not been made to be seen from the beginning to the end, especially when it is exhibited within the framework of a museum, but rather it would be an invitation to immerse yourself in an atmosphere, and perhaps wander from one room to another, see fragments, leave the room, return; But, this does not solve the underlying question: that, whatever the way the public experiences these audiovisual works, the fact is that there is a break in the rhythm of the visit when the space is shared with the plastic arts. It was within this framework of reflection that the dark room was incorporated into the context of the hyper-illuminated white cube. Surely not so much for technical requirements, which in reality there are none, as for a matter of adapting to a different rhythm of the visit, depending on whether it is audiovisual or plastic arts.

The solution of the incorporation of a dark room in the context of the white cube has a paradigmatic case such as Salle 37 in the Palais de Tokio, Paris. La Salle 37 is an authentic movie theater embedded in the structure of the great contemporary art center that is the Palais de Tokio. On the contrary, it is not a contemporary implant, it has been there since the construction of the Palais des Musees d’Art Modern (the original name) for the International Exhibition of 1937. When the fair pavilion closed then, after the International Exhibition, this movie theater fell into disuse [Later the building housed the Cinémathèque française, but that’s another story]. It was recovered in 2012 on the occasion of the works in the basement of the art center to incorporate new exhibition spaces to the set. It was at that moment —after the expansion works of the Palais de Tokio towards the basement were finished— that was when we had the opportunity to enjoy Salle 37, within the framework of the reopening of the Palais de Tokio with the Triennale “Intense Proximité”. This kind of “discovery” of Salle 37 is not accidental, but responds to a need shared by many.

The first program that could be seen in Salle 37 of the Palais de Tokio, on that memorable occasion of the Triennale of 2012 (the last one to date), included: D’Est (1995), 1h 55m, by Chantal Akerman, a classic cinema designed for the museum (which is relocated here again in a real movie theater); L’Hypothèse du Mokélé-Mbembé (2011), 78′, by Marie Voignier, a hybrid between creative video and artistic cinema; and Behind the Tin Sheets, presence (2012), 17’45’’, by Ekta Mittal and Yashashwini Raghunandan, which is the work that can be seen here on the screen (above). The program summarizes, in a skilful way, the audiovisual ecosystem that was in search of the optimal conditions for its enjoyment, and found them in the most classic space: the movie theater of the thirties of the last century, the one that knew the transition from black and white to color, from mute to sound, the one that experienced the sexual liberation of women in the back rows; although, with some changes (the most striking: the disappearance of the typical armchairs bolted to the floor; although some soft bench has been incorporated).

[As the attentive reader will have been able to observe, nothing that is being told here has to do with the presence in modern art museums of movie theaters —in the most traditional sense of the expression—, as occurs in the MoMA of NY or at the Center Pompidou in Paris, to watch any kind of modern movie].

As for Behind the Tin Sheets_presence, it is a presentation of part of the filmic material contained in the archive or work in progress Behin the Tin Sheets, which the project directors Ekta Mittal and Yashashwini Raghunandan have been doing since 2009.

The most striking thing about Behind the Tin Sheets_presence is the contrast between what you see and what you hear. On the one hand, the images portray the lives of immigrants working on the construction of a subway line in Bangalore (India). And what, in principle, seems like a documentary work on their living conditions and their uprooting, when we start to listen to the audio a displacement occurs that takes us to another state, because we are told stories in the first person that speak of dreams, ghosts and love stories.

It may be a coincidence, but the work of Ekta and Yashashwini refers us directly to “Kempinski” (2007), 13’58’’, by Neïl Beloufa, which he made in Bamako (Mali) when he was only 22 years old. Here in Spain it could be seen in 2010 in Murcia in the context of Manifesta 8, the European Biennial of Contemporary Art. That same year “Kempinski” was published in a compilation by Lowave and Sparck (Pan-African Research, Creation and Knowledge Space) “In/Flux. Mediatrips from the African world #1”. It is a truly memorable work, done with very little means. 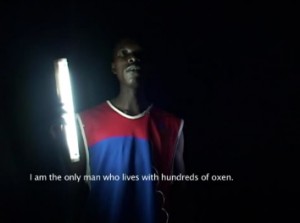 Returning to the work of Ekta and Yashashwini Behin the Tin Sheets, the presentation that took place at the Palais de Tokyo, at Salle 37, that summer of 2012, was produced by the Triennale “Intense Proximité”. From the huge archive of images that Ekta and Yashashwini have been building for the Behin the Tin Sheets project, for that occasion they made a specific selection that they called “presence”. It is therefore a specific work to be shown in a specific setting such as the Triennale and, most likely, with the knowledge that it was going to be exhibited at Salle 37. Highlighting these facts is relevant, because the other two works that made up the program: L’Hypothèse du Mokélé-Mbembé (2011), 78′, by Marie Voignier and D’Est (1995), 1h 55m, by Chantal Akerman, these are productions already made prior to their exhibition at the Palais de Tokyo, both very different, so the commission tried to complete a trilogy, adding to two ways of doing already known, a different third. The resulting set is expressive of what we have identified as the audiovisual ecosystem composed of video art, creative documentary, artistic cinema and essay cinema, which has found in an abandoned movie theater from the thirties of the last century what seems to be the place more appropriate for your enjoyment. The question that remains in the air is, if this happy combination of image and space for experimentation, they will be able to generate public sphere. It seems that some mechanism is missing to activate.