Damià Jordà (Alcoi, 1982) holds a PhD in Arts and a Master in Visual Arts and Multimedia from the Polytechnic University of Valencia. His work is divided between artistic production, teaching and research. He is currently a professor in the Department of Art at Miguel Hernández University.

His research, generally oriented towards the relationship between audiovisual aesthetics and certain social controversies, has been presented at international conferences and publications, including his book “Vaseline in the lens. Drugs in Spain from the perspective of the media” (2017, Luhu Editorial), in which he explores the connections between the social problem of drugs and their varied media representations.

His artistic practice focuses exclusively on audiovisual languages, on the hinge that links creative video with experimental and auteur cinema. Jordà's work is fundamentally characterized by the search for forms of narrative expression through the construction of essays and visual poems of clear cinematic influence, as well as multimedia installations that raise a formal reflection on our physical relationship with the audiovisual image. Most of his work is developed from ethnographic research, using images to discover links with our environment, the media and contemporary social rituals.

Among the half a hundred exhibitions on its curriculum we could highlight the monographic exhibition held in 2018 at the IVAM (Alcoy headquarters) under the title "Landscapes Found", the participation in the collective “Wege Ums Kino” in Berlin, or its inclusion in the official sections of the International Video Art Festival of Camagüey (Cuba) and the International Video Art Festival of Athens. It has works acquired in funds such as the Collection of Contemporary Art of the Generalitat Valenciana.

He has been a collaborator of La Posta Foundation since its birth, having curated exhibitions such as “Collectives in the White Cube” (December 2015). In the field of management and coordination, it is also worth mentioning the SCREENS project for the dissemination of video creation, which he directed between 2010 and 2015, and which in 2012 received a grant for the dissemination of Spanish contemporary art granted by the Ministry of Culture.

Visual artist. Born in Cannes (France) and currently residing in Valencia, she graduated in Advertising and PR by the Universitat d'Alacant, Specialist in Contemporary Art by the Superior Institute of Art of Madrid, University Expert in E-Commerce and Community Management by The Universitat Oberta de Catalunya, graduated in Fine Arts by the Polytechnic University of Valencia and currently student of the Master of Artistic Production at the same University. She was part of the organizing committee of Comboi a la Fresca, Encounters of Collective Architectures (Valencia 2011), founding member of Solar Corona as well as La Calderería. Her artistic practice is mainly in the field of ephemeral intervention in urban spaces. http://cargocollective.com/anaisflorin/ 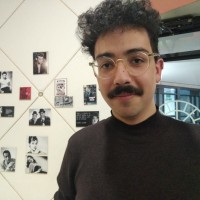 Ali A. Maderuelo (Valencia, 1993). Visual artist, editor and independent curator resident in Valencia. Graduated in Audiovisual Communication from the Polytechnic University of Valencia and Master in Photography, Art and Technique from the same center. Since 2015 he has been a member of the Carne Press editorial group. He develops curatorial projects among which are the Human Zoos. Ethnic Freaks exhibition with Julia Castelló, with which he forms Agency 17, and ethnological exhibitions with Hasan G. López at the Valencian Museum of Ethnology (2017). Recently Agency 17 they have been curators of the exhibition Can not Speak for Itself at La Casa Encendida (Madrid), within the Inéditos 2018 contest. Since that year, it has been part of Cinema to come.