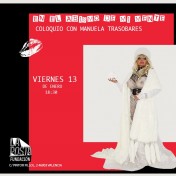 On Friday, January 13, 2023, Manuela Trasobares was at La Posta Foundation to celebrate her plastic work, and on the occasion of the recent publication of her book “Will to Power” (Editorial Hidroavión, 2022).

Within the framework of Felipe Rivas San Martín's exhibition "Sexual Data", a conversation between Felipe Rivas and Valentina Henríquez "Bots, heteronorm and dissidence".

On the occasion of the inauguration of the exhibition The Invisible Resistance of Everyday Life II: Equivoque, with works by Kim Schoen and Aitor Lajarin, we had the opportunity to listen in conference curator Juan Fabuel explaining the conceptual context in which it occurs and some details of interest to situate its significance and relevance right now. 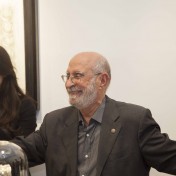 Opening of the seat of La Posta Foundation in Calle Pintor Fillol, 2, Valencia, on November 13, 2014. In parliaments Mr. Roman de la Calle, President of the Board of Trustees, Mr. Ricard Huerta, Director of the Institute for Creativity and Educational Innovation, organizer of the International Congress on Arts Education & Sexual Diversity (EDADIS), which has produced the exhibition "The Inverted Classroom. Pedagogical Strategies and Artistic Practices from Sexual Diversity", currently on display; as well as Mr. Luis Noguerol, Organizing Committee of the Congress. Opened the event Juan Fabuel, Resident Curator of La Posta Foundation, who after a few words reminding all team members of La Posta, gave the word to Roman de la Calle; and the ceremony ended with the words of Maria Tinoco, room coordinator of La Posta and curator of the exhibition will be open to the public until December 13. 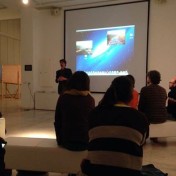