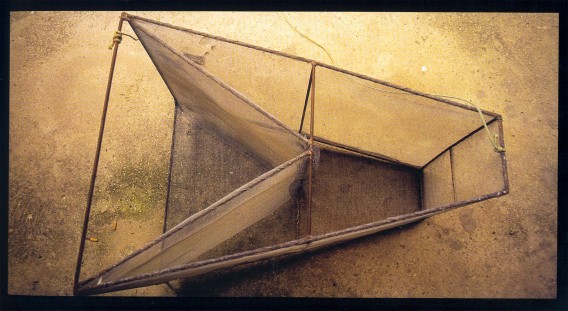 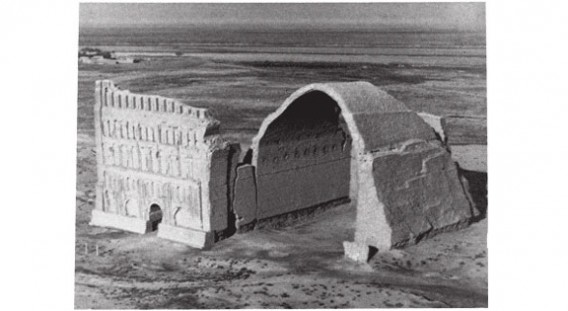 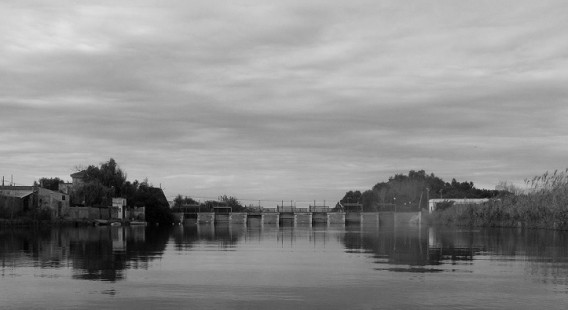 Sometimes extreme situations serve to spur the human imagination. At the beginning of the 20th century, some men from the city of Valencia, fed up with starving themselves and their families, decide to seek their fortune (or at least eat), settling in the 30s of the last century in some barracks next to the gola of El Perellonet, and decide to dedicate themselves to elver fishing. They were the first in Spain to have that idea, and to carry it out they devised a unique artifact of its kind: the monot.

The monot of goleró closed

In other accounts, reference is made to the fact that these men could be workers in the steel industry of Sagunto. Familiarity with the tooling could be at the base of the development of this artifact. Marcelino Azpíroz, a Gipuzkoan fisherman, who years later would found the company Angulas Aguinaga, S.A., with headquarters in that town of Guipuzkoa. When he discovered the activity taking place in El Perellonet, Marcelino Azpíroz went to El Perellonet (his descendants acknowledge that El Perellonet was the first place where eel was fished) and signed a contract with the local fishermen whereby He was left with all the winter eel catch for 5 pesetas a kilo. This fact was what, without a doubt, must have given a great boost to the eel fishery with the recently invented monot. 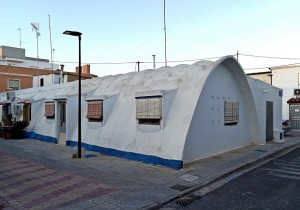 The houses of the elver fishermen 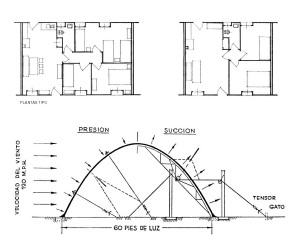 Inseparably linked to the development of the elver fishing activity, and the birth and growth of the town of El Perellonet, is the set of houses characterized by having a catenary-shaped arch for a roof. These little houses have their origin in the steps taken towards the end of the 1940s by Pascual Díez de Rivera y Casares, II Marquis of Valterra, who during the Second Republic was the founder of the Social Institute of the Navy. After the Civil War, it would be involved in replacing the barracks that the eel fishermen had been using for houses that have characterized El Perellonet since its construction between 1952 and 1953. Built with the aim of improving the living conditions of these fishermen. It is a promotion of the Ministry of Housing on land ceded by D. Eduardo Ferrer with a project by the architect Carlos de Miguel González (who would be director of the National Architecture Magazine from 1948 to 1973). Known as the Marqués de Valterna Residential Group, it is a group of small houses whose main characteristic is the shape of their roof, which has traditionally received the name “Ctesiphonte arch”, after the Winter Palace of the Parthian Kings who ruled Persia from 247 bC to 224 aC. The inspiration for the El Perellonet eel fishermen’s houses project probably comes from the publication in 1940 of the photograph of the ruins of the Palace made by the writer Roald Dahl, who was at that time receiving training as a pilot of the RAF near Baghdad, and flying over the area he took this photograph of the Arch of Ctesiphon with which he won the bronze medal in the contest organized by the Egyptian Photographic Society of El Cairo. Or else the inspiration comes from the publication, in 1938, in the Revista Geográfica Española, of a photograph on the cover of the same Palace, taken by the founder of said magazine, Valeriano Salas.

Palace of Ctesiphonte, photo by Valeriano Salas (1938), director of the Spanish Geographic Magazine

As is usual in the processes of colonization and construction of the territory, there are also events related to the construction of public works, which are determinants of said process, in the genesis and development of El Perellonet as a population center. Specifically, we must refer to the construction in 1903 of the El Perellonet gola, with its gates to regulate the drainage of the lake —and, also, for the flooding of the marshland rice fields when autumn-winter arrives, composing one of the 4 characteristic landscapes of l’Albufera throughout the year—. 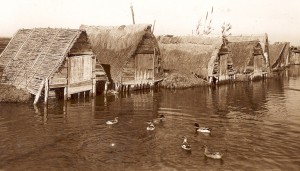 The construction of the El Perellonet gola would, in turn, lead to the construction of a house for the person in charge and guard of the gola gates, in which the Blayet family settled down to live (whose descendants run one of the most popular restaurants in El Perellonet in our times). And around the house of the manager and guard of the gates of the El Perellonet gola, the first stable accommodation began to be installed in the area (previously there were some barracks that served as merely temporary accommodation for fishermen, farmers and, it is conceivable that also hunters in the area, during the time their activities lasted, later returning to their habitual residence). Over time, this small population center that was growing very gradually, ended up being known by the same name as the ruff: El Perellonet. 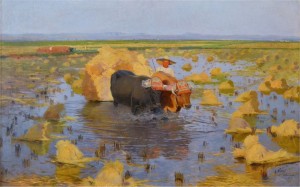 There are not many photographic images of El Perellonet from that time. However, from the end of the 19th century, the Albufera was one of the pictorial motifs that aroused the most interest in the artists of the time. Above and below two paintings by Antonio Fillol: “The rice harvest in the Albufera” (1900) and “The defense of the cabin (Hiding the treasure)” (1895) 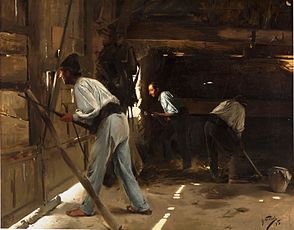 But what gave the greatest impetus to the development of El Perellonet was the construction, in 1920, of the Nazaret-Oliva highway, which in the sixties of the last century would become the CV-500 (until Palmeretes and Sueca), the CV-502 (to Cullera), as well as other transformations on the route further south (to Gandia and Oliva). In the image you can see that road upon arrival in Oliva, with the El Rebollet Service Station and Restaurant, built by the company Miguel Just e Hijos in 1962, based on a project by the architect Juan de Haro Piñar.

The construction of the Nazaret-Oliva highway is another example of modernity that is at the base of the development of this narrow strip of territory located between the sea and the lake, a gap of land of diverse origin (the Albufera lake had traditionally been Real property, ceding to the Valencia City Council ―both the lake and the coastal area known as Monte de la Dehesa―, in 1911), consequently, a territory foreign to the concept of private property, and whose colonization has traditionally taken place through concessions or other types of public decisions.

El Perellonet, and the activities to which this population center is associated, are inseparable from the Albufera landscape in which it is inscribed. In fact, l’Albufera is a built landscape, for these and other activities carried out in its area, all of them the result of continuous effort over decades, carried out, almost as it were, with one’s own hands. This is how the rice fields have appeared, through the terracing of the lake; and thus all the facilities for fishing and hunting have appeared. The imbrication of these activities in the definition of the ecosystem is such that it has led many inhabitants of l’Albufera to exclaim that they are the first species to be protected.

The artistic project began in 2016, at which time Ana Lloret conceived it in the context of the studies and practices that she is developing at the Acadèmia d’Art (at Calle Calixto III, 1, in València). At that time, based on the investigation into the eel fishing activity in El Perellonet —where there is a Fishermen’s Guild specific to this activity—, it was conceived as the construction of a large-scale monot for its installation in the El Perellonet beach, in a place near the mouth of the El Perellonet gola. An industrial engineer and three architects participate at that time in the definition of the project.

When the possibility of its development in the La Posta Foundation is raised, given the dimensions of the space, the first thing that arises is to rule out the possibility of building the monot on a large scale, while observing the plastic and semantic richness of the monot original, and therefore the opportunity of its exhibition as an artistic work, as it has been conceived by the eel fishermen, and recently made official by the Generalitat Valenciana, having established its standard form as the only practicable one. 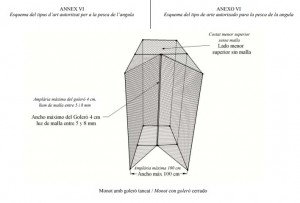 The scheme of the monot authorized for elver fishing through Decree 35/2013, of February 22, of the Valencian government, which regulates the sustainable harvesting of European eel (Anguilla anguilla) in the Valencian Community.