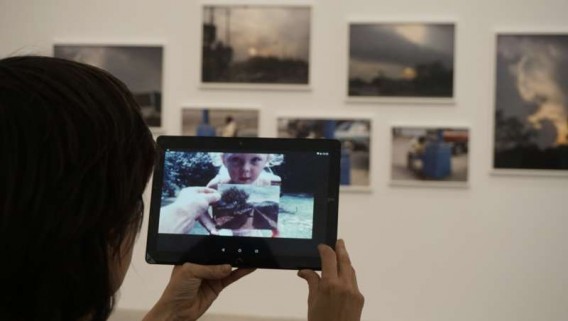 During the past year 2018 Vicente Ponce and Miguel Ángel Baixauli have launched, in collaboration with Sonia Martínez and Nuria Enguita, the program “Images on Images. From cinema to photography”, a new way of approaching the enjoyment of images, taking as an argument some exhibitions that have taken place at Bombas Gens Art Center, but the power of the device put into action is of such intensity that it has sufficient entity in itself for us to pay attention to it, independently of the exposures to which it was associated.

At some point that device has been described as “doing live cinema without a camera”. The definition is particularly appropriate for the case of one of the experiences that has taken place within the framework of the program “Images on Images”, we are referring to the action carried out by the Pygmy Orchestra (Nilo Gallego and Chus Domínguez) “Hey Cinema!” Qualified as a film-performance or “open doors” of a workshop ―so difficult to approach the new format is presented― [to get an idea, nothing better than looking at the images on the carousel, above].

Already in that action emerged one of the most characteristic aspects, which is the incorporation of scenic elements. It is not that the cinema is not, but now it is more staged, to the point of “making live cinema without a camera”. Andrés Duque delved into this idea, in his intervention in the exhibition “The whiteness of the whale”, by Paul Graham, with the work “Sound Street”. “Sensory perception is not just a physical act but a cultural one. This means that sight, hearing, touch, taste and smell are not only means of capturing physical phenomena, but also ways of transmitting cultural values”. From this premise, it launches to the public attending the exhibition (in previously agreed moments, what was previously called “guided tours”), in search of the urban atmospheres that appear in the photographic works shown in the Paul Graham exhibition, with the order to record the sounds suggested by these works. Of that interaction between the physical and the cultural, Andrés Duque had already talked about narrating his adventure of knowledge with Oleg Karavaichuk, on the occasion of the making of the film “Oleg and the rare arts” (2016). He says in the interview in which he comments on this experience, made on the occasion of the exhibition of the film at the Punto de Vista festival: “what interested me the most was his creative process, that is, those little rituals that he has to compose music, which are often as strange as letting their hands go through the marbles of the Hermitage, feeling the vibration of the marbles, and then extracting music and then transferring it to the piano” (minute 6:30, you can see it here).

The uniqueness of these actions and their willingness to define a new cinematic format can be seen more clearly when observing their ability to distance themselves from the program in which they were created (“Images on Images”), expanding into other programs, such as, recently, his experimentation in the Cinema to come program for the Carmen Center (October-December 2018). In this case has adopted a new presentation in workshop-performance format by Sofia Asencio “Take the film elsewhere”, a presentation scene that underlines, simultaneously, the cinematographic and scenic aspects of this way of looking.