Felipe Rivas San Martín commented, when the video of Gus van Sant and Alessandro Michele “Ouverture of something that never ended” (2020), a production for Gucci, starring Silvia Calderoni, appeared on the internet in the post published on his Facebook on November 18, 2020:

“This case has also caused controversy. And I think the same as with the Falabella case. The problem is not prostituting with fashion. The problem is self-blaming an alleged wrongdoing by producing a splendid video with Gucci. Fashion does not «leave its place of comfort to incorporate dissident bodies». Fashion incorporates dissident bodies because that is fashionable. Queer capital gain is called”.

Shortly before, in a post of November 1, 2020, referring to the Falabella case (an art project developed by the chain of stores of that name), Felipe Rivas had commented:

“The Falabella Art project is the recent initiative of a Chilean commercial company to incorporate within its field the niche of the visual arts, specifically photography. The project was directed by the curator Matías Allende and counted on the advice of the photographer Paz Errázuriz. From the platform it is advertised as a democratizing proposal since it brings collecting to a wider audience and at affordable prices. I understand that this project has generated a lot of controversy. Associating photographers with a commercial store has been questioned because it would be a betrayal of the critical role of artists and a perverse association with the market and neoliberalism. […] I confess that all these criticisms seem uninteresting to me. They involve a kind of morality applied to art. Just as I have no problem with prostitution, I celebrate it, I also have no problem with prostitution of art. Artistic practice is tremendously precarious in Chile and, as Bertolt Brecht said, «first bread and then morality». [He then refers to the fact that what seems objectionable to him is the low percentage that artists receive for their work]. “…that artists receive 30% is ridiculous, even prostitution has ethical limits. The Falabella thing is not even art prostitution, this is already plain and simple trafficking in artists”.

That supposed prostitution of the artist when selling his work has a lot to do with the value given to the “authentic”. The idea of the authentic is very dear to the rock culture —which has penetrated so many fields of knowledge— which despises the false (that is in that context, almost always, what women do; in between Patty Smith or Chrissie Hynde trying to save the face). The “authentic” is currently one of the few conceptual strongholds in which middle-aged heterosexual white men (the European w.a.s.p.), can breastfeed and present themselves in society as “great” men. On the opposite side of the “authentic” —and this is an opposition strategy that is almost a queer standard of action—, there is the option for that which is mixed, polluted, hybrid, on the border, between two seas or intersex.

Returning to the film by Gus van Sant and Alessandro Michele “Ouverture of something that never ended”, it does not seem that a prostitution accusation for having been sold can succeed, because neither of them come from any state of authenticity, and those resounding statements of that it would have left a supposed comfort zone by incorporating dissident bodies, it seems more like a thing of the film’s publicists, who would seek to establish a certain distance with what is seen in the film (just in case any of Gucci’s client viewers gets scared), because the truth is that neither Gus van Sant nor Alessandro Michele have left any comfort zone, their bodies have been dissident for a long time. What does remain standing, intact, is the question pointed out by Felipe Rivas San Martín, which must be asked before the splendid video produced with Gucci, once the evidence that we are faced with a case of queer capital gains has been verified, the question is : how the wealth that is being generated is distributed (and we must not think only of the authors and protagonists of the video, but of the entire LGTBI community); and even, going a little further, how video manages the underlying cultural and ideological conflicts. 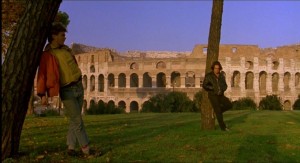 Gus van Sant traveled to Rome for a 12-day shoot and in the end 7 episodes of “Ouverture of something that never ended” were recorded. It might seem that it is a strange encounter with Alessandro Michele, but the fact is that there was something foreboding in My Own Private Idaho (1991), the most celebrated film by Gus van Sant, when Mike (River Phoenix) and Scott (Keanu Reeves) travel to the Italian countryside passing through Rome, in search of Mike’s mother (of whom he is obsessed). Why Rome? In a first version of the film’s script, this trip is made to Spain. There seems to be a search for a location for a spooky journey itself, because the characters don’t move from the mental world they live in. It seems that a mysterious and timeless environment is sought, thinking about the dreamlike and unreal world in which Mike lives. Perhaps more typical of the Black Sea than the Mediterranean Sea (again between two seas). The fact is that Alessandro Michele and his works, both in fashion and now in “Ouverture of something that never ended”, at times remind us of the set designs of the films of the Armenian Sergei Paradzhánov. 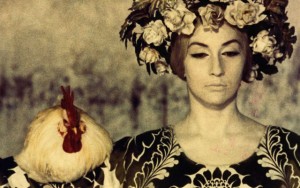 This apparently fortuitous encounter between Gus van Sant and Alessandro Michele in “Ouverture of something that never ended”, has served the film director to affirm: “After doing this, I am definitely inspired to relive the way I have worked in the beginning of my career. Meanwhile, the exhibition in cinemas is imploding and everything will go directly online as these shorts did” (TÓNICA digital magazine, November 22, 2020, an article by Eduardo Ávila).