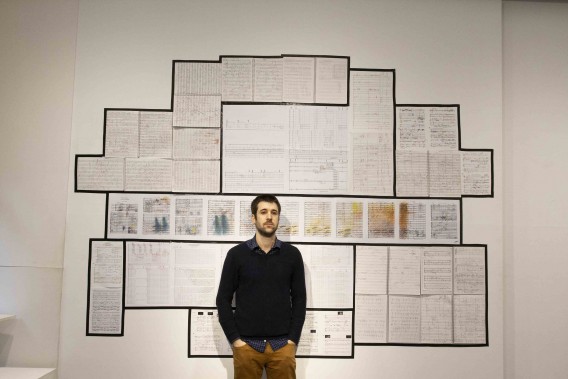 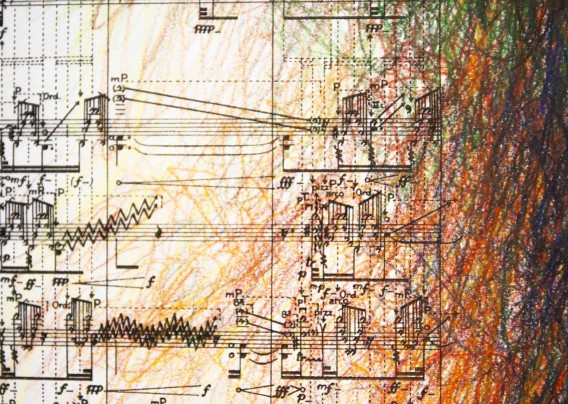 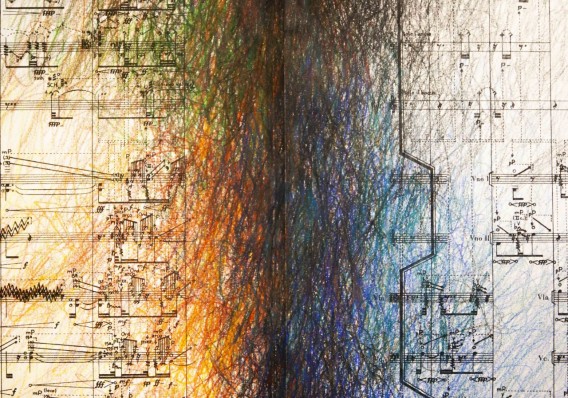 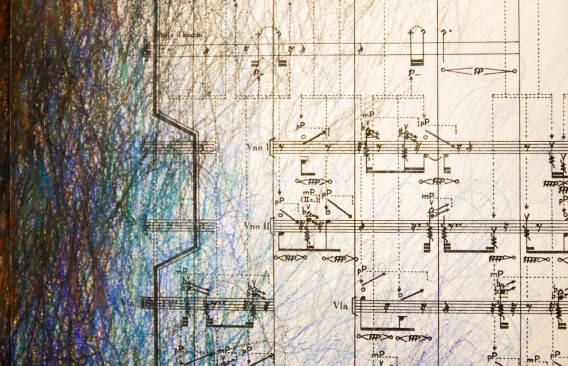 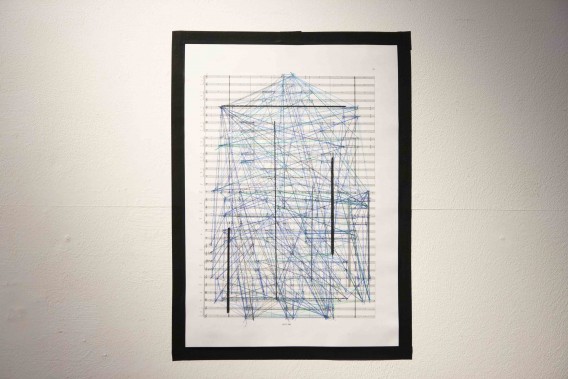 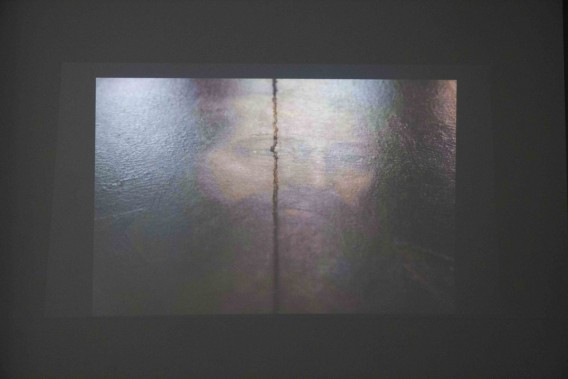 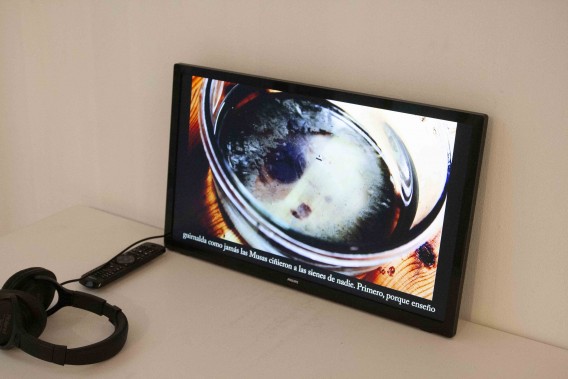 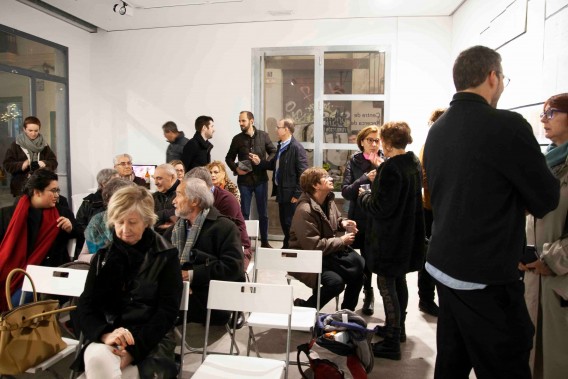 As we have explained in the presentation of this exhibition of works by Joan Gómez Alemany “Between the visual and the sound. Reappropriation of matter and material ”, there is a firm will to transcend disciplines, and based on a firm point of origin in music and sound art, Joan Gómez wants to cross the boundaries of his own discipline to incorporate the visual, embodied in plastic, photography and cinema. Therefore, borders imposed by the academic distribution of knowledge would be transcended, in order to encompass a holistic whole. In this there is a will to establish a new order, because as explained in the presentation of the work of Joan Gómez Alemany on the day of the inauguration of the exhibition by María José Martínez de Pisón (member of the Board of Trustees of the La Posta Foundation, teacher In the Master of Visual and Multimedia Arts of the Polytechnic University of Valencia, promoter of Pluto CC entity specialized in sound art, etc.), really in our daily experience there is no separation between vision and sound: we see a person who we He speaks and we listen simultaneously ―for example, reciting a poem, which in turn activates a multiplicity of images in our brain. We have heard many times José Manuel Costa, one of the best specialists in sound art in Spain, say that the fine arts are quite deaf (or mute) when it turns out that “almost everything that is seen also sounds”. Despite this evidence, the case is that at some point it was decided at some instance that the knowledge and artistic practice of both media had to be segregated.

However, the joint phenomenon of vision and sound can be approached in an integrated manner, and with varying approaches. The scores on which Joan has intervened through graphics of a very powerful plastic, show the transcription to the visual of written music with classical notation, through a system of visual cues that apply the different colors depending on the results of studies psychological about the significance of them in their relationship with the sounds we hear. There are other transcriptions in the scores shown, because electroacoustic compositions usually written in the electronic notation itself have also been transcribed, which have been passed to the classical notation of tonal music ―this helps us understand that the same notation already it is a transcription from the sound to the visual (like all written languages that transcribe speech into an image)―.

This practice, working on scores, has been addressed in the past, for example, by Olga Neuwirth in “… miramondo multiplo …” (2007), presented in Documenta 12 in Kassel. Although in the case of Olga Neuwirth it is a very simple musical work, which does not reach the complexity, both conceptual and expressive, of the work of Joan Gómez, which in that sense is a vanguard work. However, this background is brought up here, because what we are going to say is that Joan Gómez’s work presented in “Between the visual and the sound” is part of a line of work that has the backing of the most important institution of contemporary art, such as Documenta. 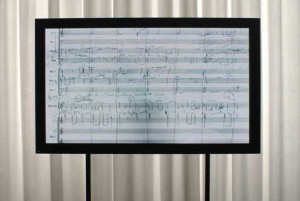 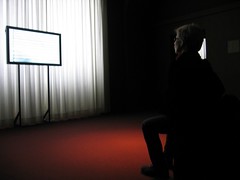 Carmen Pardo, the President of the Board of Trustees of La Posta Foundation, has also paid attention to this exhibition, a person of recognized prestige in the field of sound art, who has highlighted in particular that: “The treatment of the camera in Devil’s weapon, head of sin, destruction of paradise, offers a tempo that is wonderful for the days that run”. Devil’s weapon, head of sin, destruction of paradise (n.d., although necessarily recent), a title taken from La Celestina by Fernando de Rojas, can be seen here.

Time is precisely what is between the visual and the sound. It is known that light travels much faster than sound waves. All human beings have a direct experience of this physical fact, when we see the rays of a storm and shortly after we hear the thunder. However, Joan Gómez’s work seeks to shorten that distance, which is really only noticeable over large, almost cosmic distances. Although some cosmic is in his work. Carlos Maiques has been able to appreciate it in the magnificent drawing he made on opening day. “The various fragmentary elements are like stars, each star exists in its own right, has its fixed position in the atlas of life, but when taken together they form a constellation arrangement, unfolding before us the fragility of thought and writing of artist in the context of its existence and creative process. However, his universe does not fade into infinity” (Sandra Schwaighofer). 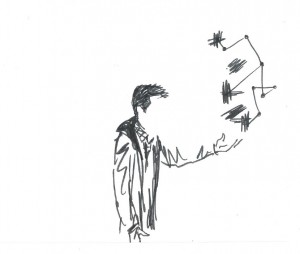 Joan Gómez Alemany, who is 29 years old, comes from an initial training in music, which later has moved towards the visual arts, searching hard for transdisciplinarity. He moves with ease in a wide range of ocher, and his music/sound art seeks, as he says, to be at the same level as the images, in that sense, nor does it seek to make it go unnoticed, non-existent, according to the modern ideal, nor give it an autonomous role, but using its words, it is: “a work that wants to see the sounds, in the same way that the images are heard”.