What can be done in the field of art ―a sector so attentive to people’s concerns and interests― when we are immersed in a process of change as profound as that represented by the introduction of internet? [only comparable to what the invention of the printing press supposed 500 years ago].

The response offered by LABi (Laboratory of Thought, Creation and Dissemination of the Image), a project of the Master in Photography, Art and Technique of the Polytechnic University of Valencia in collaboration with La Posta Foundation, is a drift or displacement through the fields of relational art, which has materialized in “The Apartment”. It is about the configuration of a physical space that, despite preserving the characteristics of an exhibition space, “aims to be an extension of time, of thought, of action, of conversation, about the possibilities of habitability in the city”, according to it is said in the presentation of this edition of LABi, on this same website [http://fundacionlaposta.org/en/lapartament/ ].

It is not the first time (nor do we suppose it will be the last), that an immersive experience takes place in a web of relationships between the private and the public, with the declared intention that it have a creative result. In fact, some of the experiences in this field that have taken place in the past in the city of Valencia are present ―in one way or another― at the birth of La Posta. This is the case of experiences such as La Calderería, Solar Corona or Breakfast with passers-by. However, in the case of “The Apartment”, it is a matter of bringing to the space of art recognized as such, a fragment of real relationships (in some cases ―in relation to some of the programmed actions―, these are pre-existing relationships), for recreation in “The Apartment” space in La Posta.

We also have, at the opposite extreme, abundant examples of generating relationships in the museum space with little or no connection to reality. This is all History. The relational experiences have not been left out of the concerns of Art History, having received various names. The first name adopted identifies this activity with a broader cultural paradigm such as situationism, although the characterization and classification that has had the most acceptance is the one that has assigned it the name of “relational art”. One of the characteristics attributed to it is an apparent collectivist character. However, the truth is that most of them follow the triumphant paradigm since Vasari and his book The lives of the most excellent painters, sculptors and architects, published in 1550. Although, the experience developed now in La Posta in the care of the LABi team, exhibits a marked collective character, a factor that is maintained even as the successive artistic residences that inhabit “The Apartment” are incorporated into the project; which are necessarily temporary ―”because places have become mere transit areas”―, so that the ensemble becomes a choir of multiple voices that do not seek to find their place in the world. 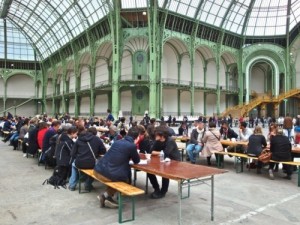 In the process of historification to which we are referring, it is usually cited as one of the most relevant milestones ―it is one of the references that would give rise to the statement of “relational art” by Nicolas Bourriaud in 1998―, the referred the artist Rirkrit Tiravanija; and, within his career, his action at the Grand Palais in Paris, on April 7 and 8, 2012, is usually cited as particularly significant, on the occasion of the opening of the Paris Triennial of that year (which has been, for more coincidentally, the last edition of this event), at which time the Thai born in Buenos Aires prepared a bowl of soup for the thousands of people attending the action: “Soup / No Soup”. We here in Valencia also had our great experience in this regard, with the “Store of Adequate Behavior” curated by Bruce McLean and Will Alsop, within the framework of the 2003 Valencia Biennial, with a macro-installation at the Carmen Center, which was intended to house the actions topically attributable to “avant-garde” department stores, which included the sale of design objects, a hairdresser, a bar-restaurant, a “site-specific” reading bookstore, chill out… 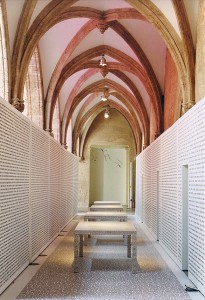 As it is a type of actions derived from a certain conceptual and minimal art ―in that they emphasize the intervention of the public, which with their physical presence and not just the gaze, would end up giving meaning to the work― the documentation of said actions is of notable interest, at which point photography has a relevant role. In this sense, it is necessary to highlight, among the actions developed in “The Apartment” the case of “Safareig”, which has left behind a good number of images, loaded with a plastic that at some point recalls social realism that the same Antonio Fillol who gives name to the street where the events occurred practiced; to which must be added a succession of happenings that have included music, a dark room, and, in some cases (in some of the actions carried out), a nihilism in accordance with the theoretical framework in which the entire program unfolds. 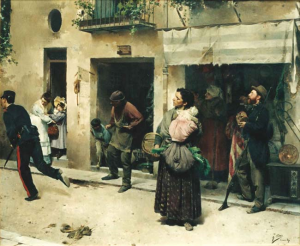 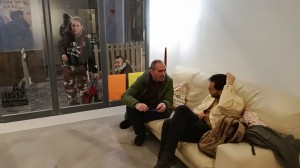 The activities in LABi’s “The Apartment” have been preceded in La Posta by the series of actions organized by Norberto Llopis and Miguel Ángel Baixauli: “Silence”, within the framework of the “Variations on the Plane” program curated by Angela Montesinos and Juan Luis Toboso for IVAM Produce. In particular, one of the latest actions carried out so far “Questioning”, by Paula Valero Comín, constitutes a good link between one series and the other. It seems that it is the most appropriate way to approach the historical bankruptcy and the true decomposition of reality in front of our noses own, which is taking place in this change of era. 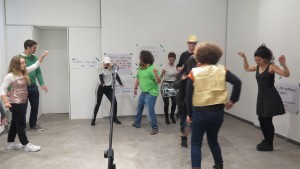 At the moment, the sequence of artist residencies in “The Apartment” is interrupted by the coronavirus crisis. Another crisis.