We started the 2015-2016 season with the exhibition Colectives in the white cube. Audiovisual proposals “in the limits” for a changing society. From December 3, 2015 to February 13, 2016. The exhibition was considered as a combination of video-creation, non-fiction cinema and video installation, following the line of work we have called In the limits, and aims to cross the borders of these labels associated with audiovisual languages to understand the relationship of this medium of expression with both artistic space and society as a whole. The list of works and artists that could be enjoyed includes: “Absurd Speed” and “Overcome the Barrier”, 2014, 20′ 54”+ 6′ 23″, of the collective Left Hand Rotation; “Nothing to gain, nothing to lose”, 2015, of the duo SomosNosotros; “Drift 001″, Cinematrueque team; And “The Good Guys”, by Paupac Azul. 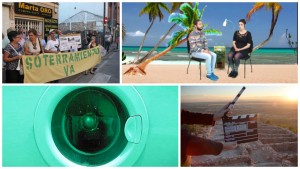 After the exhibition of these works at La Posta Foundation, and as had been done previously with the program In the limits developed in the previous season, the experience of the viewing of these works was prolonged later, changing the conditions physical and plastic environments, offering the possibility of viewing on the La Posta website. If it had previously been an immersive and material experience, projecting the images onto a reflective surface, accompanying it in some case of documentary material of the recorded actions ―as was the case of “Overcome the Barrier” of Left Hand Rotation―, or adopting a form Sculptural and with it, promoting a certain reification of the image ―as it happened in the case of “Nothing to gain, nothing to lose” from SomosNosotros―, now offering audiovisual images for viewing on the web, through the screen Plasma or LCD monitor, a typical digital experience was generated which, as such, usually occurs, is produced in the domestic sphere.

In May, the team of Cinema to Come [Miguel Ángel Baixauli and Sonia Martínez], branches, extends and mutates, and, starting from the days that are produced annually in Las Naves. CCC, have incorporated for La Posta a program of activities: Politics(policies) of a cinema (to come); in collaboration with Pluton CC and Cabanyal Íntim.

During those days we had the opportunity to see and hear, on the first day ―a Saturday― a set of interviews with the participants in the days of Cinema to Come celebrated between February and March 2016 (María Ruido, Eloy Enciso, lacasinegra and Luis López Carrasco). 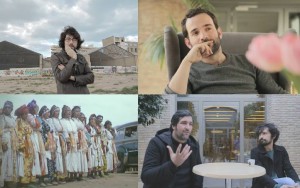 And, in line with the activities carried out in the previous season at La Posta Foundation “In the limits 2nd part: Publics to Come”, being convinced of the idea that publics are built, created, carried away there was a special effort to renew the formats of the activities for that purpose, and after viewing the video interviews to which we have referred before, there was SYMPOSIUM and continued the session in Pluton CC with a jam of images and music in charge of Tarantulas Pentium, Pau Berga and Carlos Escolano. The video that heads this chronicle is of that moment in Pluton CC.

Also in this edition of Cinema to Come in La Posta worked on texts [the proposed text you can read on the web of Cinema to Come doing clik here]; Alfonso Amador’s film “50 days of May (essay for a revolution)” (2012), in the framework of Cabanyal Íntim, and, as a colophon, on Wednesday, May 18, the presentation of the video-conversation with Vicente Ponce, who continued in the room with the same Vicente Ponce present at the event. At that moment belong the images below. 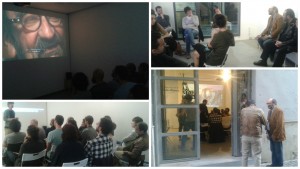 When June arrives, this is a month that has already been established in the calendar as the month of gay pride, now LGBT (lesbian, gay, bisexual and transsexual), a time of the year in which words and images are mixed with particular intensity, so La Posta can not be absent from this celebration. From June 16 to July 16 La Posta hosted the exhibition Museari: Aesthetics of Sexual Diversity, curated by Ricard Huerta, included a whole set of works by the artists who have exhibited their work on the Museari website during the Season 2015-2016, and that now, fruit of the agreement signed between Museari and La Posta Foundation, they have been able to see in person and physical in the headquarters of the Foundation La Posta. A set of works that includes: 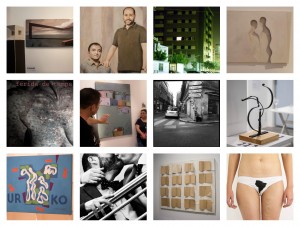 Each of the works were the subject of special attention in posts that were appearing published in the facebook of La Posta. This allowed that anyone could have particularized knowledge of these works from the privacy of his private room, through the PC screen.

The exhibition included a complete program of activities such as the conference of Germán Navarro Espinach “Trans visibility in history”; In another day, a talk-colloquium with LGBT activists, journalists, artists and educators. For the first time in La Posta, guided tours were organized for groups and open to the general public. Guided visits included the participation and collaboration of AVALEN, the Valencian Association of Educators in Museums and Heritage, and the collective LAMBDA. As an act of closure: the presentation of Museari prizes to groups and LGBT activists who have stood out in the defense of the rights and in the support to the LGBT community; The act ended with the performance of Urko Gato. 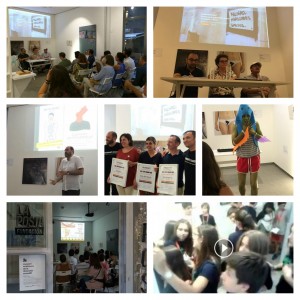