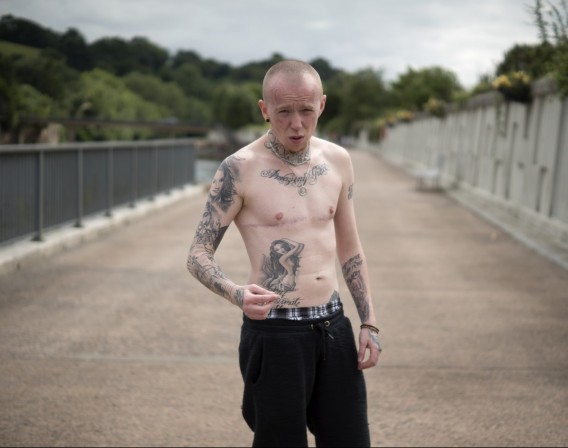 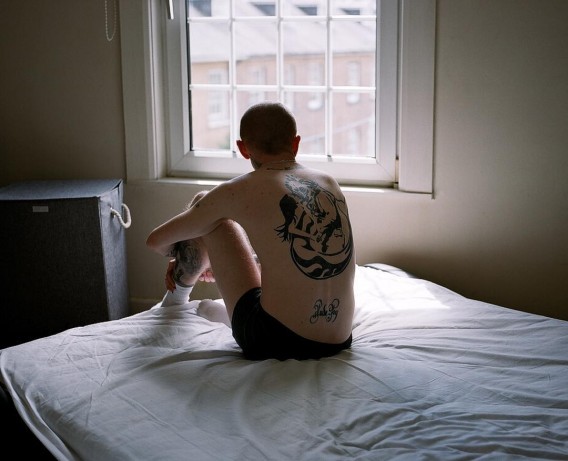 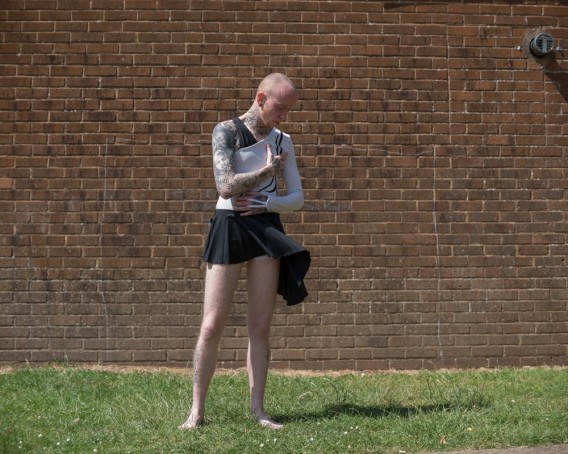 With photography it happens sometimes that you don’t know if you have to look at what is photographed or in the photograph itself. Well, in the case of Beccy Strong’s photographs for this exhibition “Self Made”, we must look at everything. The name “Self Made” is not casual, and refers to the protagonist of the photographs: Kay J. Browning. He is a self-made man. An authentic force of nature. His physical appearance indicated that he could be of one gender, but his inner nature told him that he was otherwise. In the end the idea about nature -which we already know is a theoretical construction-, has ended up winning. That is why the confusion when seeing the photographs, that we do not know if we have to pay attention to Kay photographed or in the photographs themselves, work of Beccy.

Next to the exhibition, a meeting between Kay and the collective trans ftm has been proposed. Specifically with “FtM Valencia”. It deals with that there is an exchange of experiences, to rearm in the defense of human rights. In fact, the exhibition is born from the fact that Kay was before the summer on the continent on tour, giving some lectures, meetings, enriching her experience for a future that he imagines writing, when La Posta Foundation contacted for its inclusion in the program of activities parallel to the exhibition “Museari Queer Art”. Finally it could not be due to an agenda problem, and it was postponed for this start of the season. Now his participation takes place in the framework of the exhibition of photographs that Beccy Strong has done to him. It could not have gone better.

BECCY STRONG came to photography after an international career in broadcast film and documentary. She now works with Photography, film and sound.

Recently completing a Masters in Photography at Plymouth University her work broadly explores questions about our changing relationship to nature and the impact that is having, both internally and externally in the landscape and world around us.

Beccy works on research led self initiated projects, and also collaborates with other artists as a filmmaker as well as doing commercial work in photography and film. She is currently lecturing in film at Plymouth college of Art.

Beccy Strong is an old acquaintance of La Posta. He presented his work last year in the framework of the collective exhibition “neXos. New looks in European documentary photography”, a project of ENMap (European Network of Master Studies in Photography), an exhibition that was organized by students of the Master in Photography, Art and Technique of the Polytechnic University of Valencia, in frame of PhotOn International Festival of Photojournalism. When Kay told us that Beccy had taken some photographs, after seeing them, we did not doubt that they were perfect for the occasion.

Beccy Strong commented this summer in a post about her photo project with Kay: “Im working on a long term project with Kay Jane Browning @instakingkoala and in the process of working together we are getting to know each-other. Each time we meet we talk more and the process opens up. Kay is a transgender man. He is also an infinite range of other namable things, a son, a brother, a friend, a dancer, writer and human rights campaigner. We met up recently and talked about these labels our psyche clings to for security. How society also likes to have a name or label to categorise and place one”.

It is a very happy moment for La Posta Foundation to be able to show this work by Beccy and to offer Kay the opportunity to develop an action in favor of the human rights of all, beyond labels.