Within the workshop "Take the film to another part" that Sofia Asencio directed from November 27 to December 1 (between the Carmen Contemporary Culture Center and La Posta), a "film-performance" was announced for the final day of a certain mystery, because the possibility of participating in it was allowed independently of the rest of the workshop; only one condition: we had to remain attentive to the screen to know the meeting point, which turned out to be, as it was announced 24 hours earlier, on Pluton CC (C/ En Plom, 5) 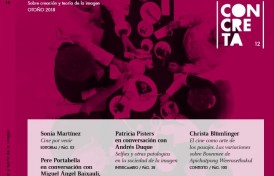 Within the programming of the VI edition of Cinema to come, presentation of the monographic issue of CONCRETA dedicated to Cinema to come + screening of Umbracle by Pere Portabella at the Filmoteca (the film library), Thursday, November 29 at 8pm.

In this workshop I propose an experimental work around a film and the ways of seeing it. We are going to divide it into fragments and we will decide in which places those fragments will be projected. This will generate a transit parallel to the film. 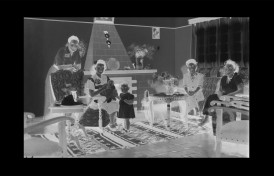 Last film by Chus Domínguez, a work on Spanish colonialism in Morocco. Between 1947 and 1949 the photographer based in the Canary Islands Bonifacio Hernández Gil made numerous photographs for the army and the colonial administration of the so-called Spanish West Africa. In his images appear new cities as scenes of science fiction movies, surrounded by the desert and half-empty, prepared to welcome the new man that the regime designed.

Public to Come (II) will consist of a series of work sessions of the group of spectators and participants in the activities of Cinema to Come 2017, which go on to elaborate their own film works; sessions of a Workshop of Publics to come (II) that will be developed during the month of May in La Posta Foundation. The culmination of the process will be the public presentation of the resulting works on May 27, at 8:00 pm, at the La Posta Foundation. 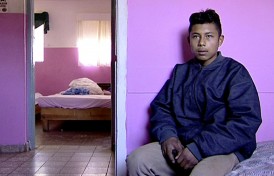 Cinema to Come arises five years ago with the aim of activating a community of agents, individual and collective, around the cinema and the contemporary image. Community more or less ephemeral, linked every time to the event of its own emergency but that insists and subsists in the time. 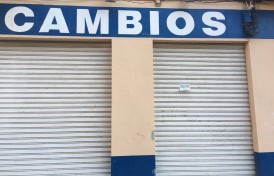 Following the trail of the Publics to Come action, which had its first edition the previous year at La Posta...
Read more »

In the fourth edition of CINEMA TO COME held in February and March 2016, they were raised in the Image Section a series of three dialogues at two levels: dialogues between current films and films from the filmic modernity, and dialogues between guests filmmakers and people from other disciplinary fields. All films chosen are highly political character, which a dialogic practice with political processes as linchpin was established. In addition, guests filmmakers they underwent a series of filmed interview in which he talked mainly about politics in contemporary cinema.