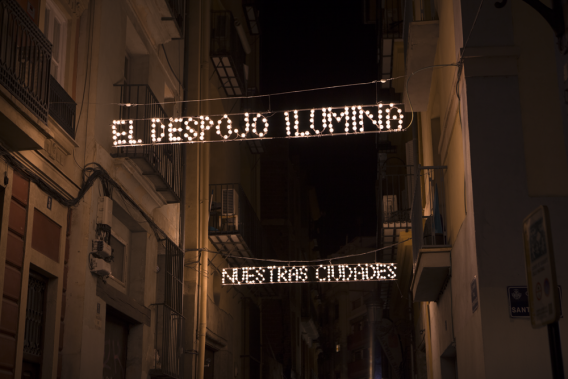 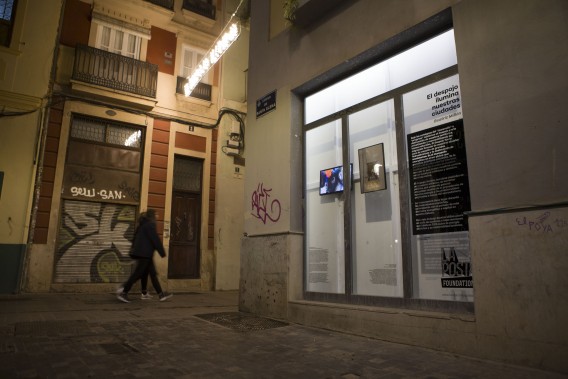 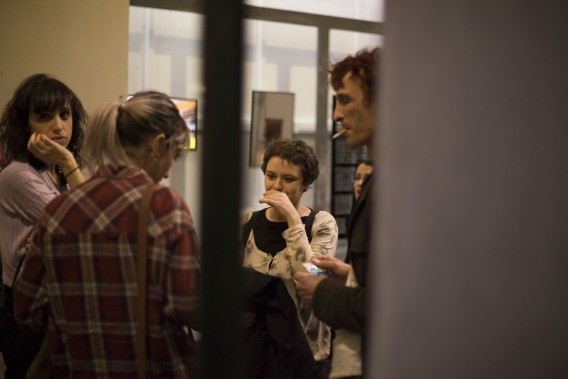 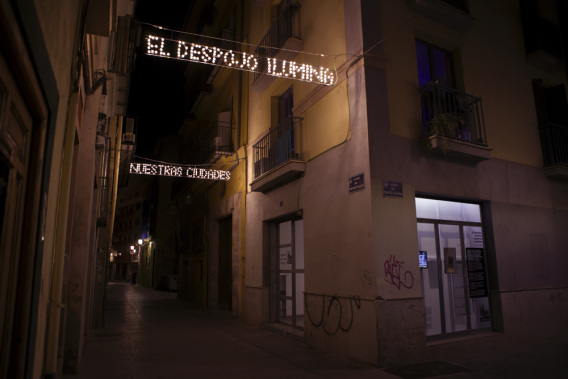 Does the artistic object show an image or trigger an image inside us? In the case of Beatriz Millón’s work “The spoil illuminates our cities” it is difficult to distinguish, because it is pure light, electric, dazzling. The flashes of the lights are mixed with the images that glare activates. Memories of childhood, of the Christmas fair, between roller coasters and bumper cars may come to mind. And also bring back the stories read about the sadness of the clown in his wagon at the back of the fairground attraction.

But there is more, there is a “deferred look”, as Román de la Calle calls him (“Allegories about the history of a -private- hunting ground”, 1997, CAM, commenting on Silvia Sempere Coto Privado de Caza’s exhibition , at La Llotgeta Art Center, Valencia), in reference to the fact that, even in the case of an artistic work with a strong connection with the medium ―in the case of Beatriz Millón’s work, putting light in relation of the light bulbs with the activity of the companies that exploit natural resources for the production of electric energy by means of procedures that are often unsustainable― this relationship through the eyes is not produced in a direct or explicit way, but suggested through “links, citations and juxtapositions that zigzag”, in the present case, all reinforced by the glare produced by electric light.

On the other hand, an enormously relevant aspect of Beatriz Millón’s installation is the fact that it is in the public space. These are arcades of lights that are exhibited in Pintor Fillol Street, 2, in Valencia, next to the headquarters of La Posta Foundation, during these Christmas days of 2019 (until January 6, 2020). In that sense it is an installation that returns to the traditional space of public sculpture, giving the work for such reason of added meanings, those of public art. This raises, among other issues, a very special relationship with the public.

The interest in the relationship between contemporary art and the public, promoting it and integrating it into a more intense experience than mere contemplation, constitutes one of La Posta’s foundational objectives. And in the case of public art in particular, a major challenge arises in this regard. Because the transformation operated by public art in recent decades has particularly affected precisely this aspect, that of the public’s relationship with the work of art. On this issue we already refer to a certain detail in the post “Emerging workshops and social sculpture” on this website.

In addition, from La Posta we encourage artists to have a direct experience of the public’s reaction to the work. Much of what is said about public misunderstanding in relation to contemporary art, has to do with the ignorance of a part of the sector in relation to how the public is formed in the act of receiving the work, a meeting that should be propitiated for that reason. In relation to this point, Beatriz Millón’s assumption of this challenge could not have been more positive. She told us herself in an audio sent by whatsapp. The transcript is this: “… for what you told me to have the experience [of the public’s reaction to the work] for me is something very important, that in the end… well, we do these things for ourselves, but also to have another message, then [it’s about] seeing if in the end that code, that way of approaching things flows or not; and, then, there were all kinds of people, who stood [before the arcades of light], people who did not, many people who passed by, as if looking at it, were missed and followed; but it was very nice to see people approaching; I had a good time taking pictures, many people stopped me, there were many tourists, they asked me “sorry, whats mean «despojo [the spoil]»?”, I didn’t say it was mine, I explained it a bit, I read the text [in the window], and very nice things came up, I really liked it; Now on January 4 and 5, I will be at Tenderete, the book fair, with an independent publishing house that I have with a friend [Rubs and Burning], and see if I can spend a long time in the afternoon [on Pintor Fillol Street, 2, where the arcades of light are], …how will I be close…». 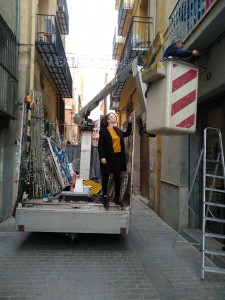 Beatriz is of the idea ―also she― that public art seeks and builds its audience. If in general contemporary art has to create its public, in the case of public art this is more evident if possible, because it is not an audience that intentionally goes to the art space to meet the work or action, and have a specific experience, but in the case of public art, art jumps to meet him and puts him in the situation of adopting an attitude towards him. It has always been this way, but before those attitudes were very codified, because public art imposed a very important hierarchy among the author of the work, which sought to associate its status with the historical moment represented in it, or with the absolute concept of which the work was an allegory, leaving the public down there, literally at the foot of the pedestal, a situation that in the current context is simple and plainly impracticable, having given way to a very diverse variety of attitudes, some of which are not alien to contempt (there are also those of unjustified adoration), but that cannot be rejected or discarded without further reciprocal contempt, but should serve as an incentive to deepen the understanding of what the public expects to come from contemporary art. 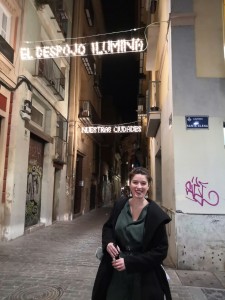