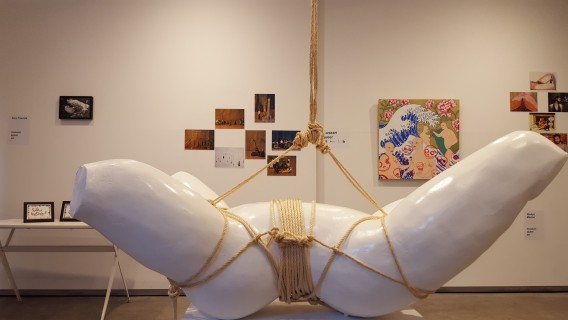 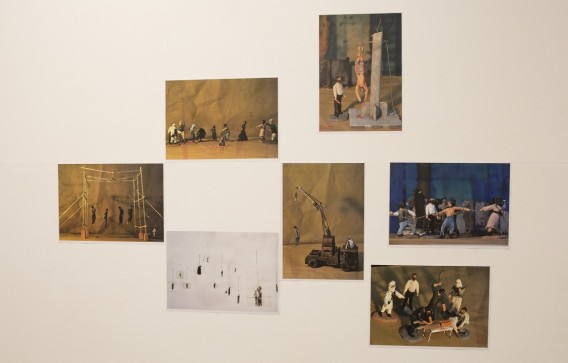 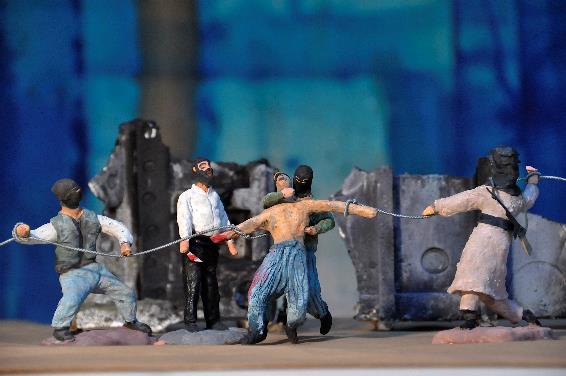 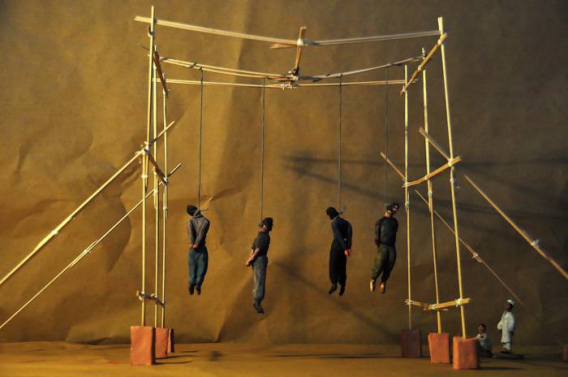 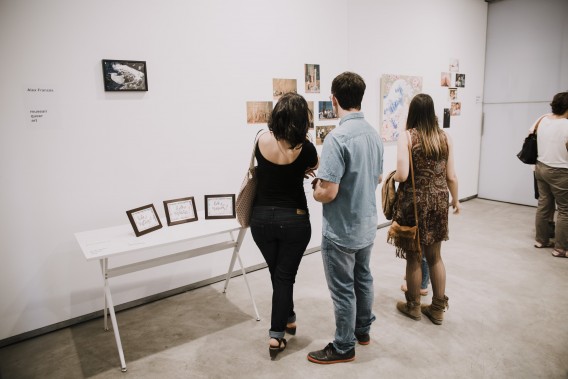 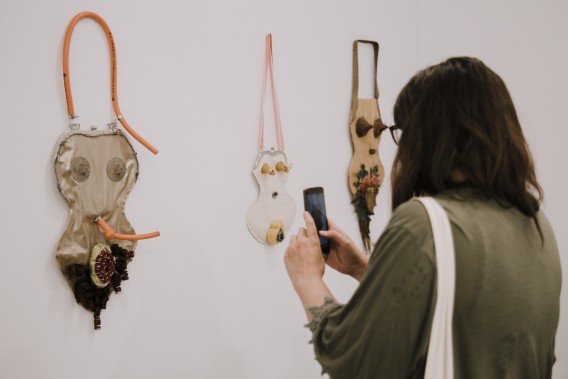 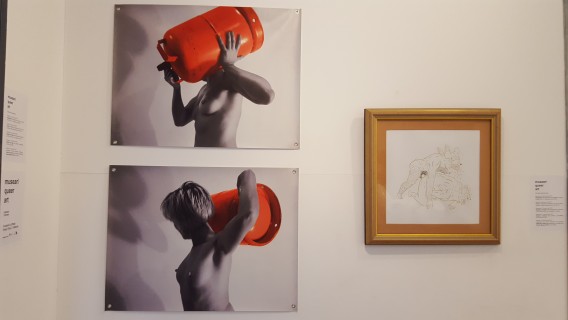 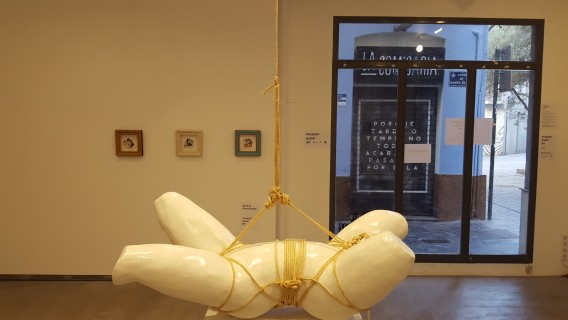 There is a growing tendency towards LGTB content. In terms of formats and resources, photography dominates, although there is also sculpture, mixed media, installation, drawing, painting, and an unusual technique such as models ―although we already had it last year (Giovanni Nardin: “KIU. Urban Inquietud Kid”; and Anna Ruiz Sospedra: “Caligula-Venus”). What happens with the models? Only because of this question ―that ability to generate a question― is it worthwhile to dwell on it. The models that are part of this 3rd edition of Museari in La Posta are by Javier Velasco: Proyecto Sharia (on the tortures carried out in the name of the Sharia). The artist has had the success of putting it in relation to the Christmas nativity scenes. Although it also refers to “The Disasters of War” by Goya. However, the crossing of both references which brings us to mind are the works of Jake and Dinos Chapman: Great Deeds Against the Dead (1994). All relevant references, because the models have their origin in the R & D of war, and because whole holy land is a war. It is precisely the land of human butcher shops where models have their origin and one of the most characteristic applications. 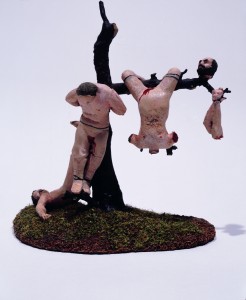 Jake and Dinos Chapman: Great Deeds Against the Dead (1994)

On the other hand, the models are a kind of miniatures. On the miniatures we have tried thoroughly this season on the occasion of the museographic retrospective “Alexander Kluge. Gardens of Cooperation”. There are many authors who use this term to refer to the work of Kluge, in particular to refer to the work produced in the last decades for TV. The term has its origin in the plastic arts, having been used in the past to designate the illustrations of the medieval codices, from there it happened to the objects, often artistic, of small dimensions, some of which ended up integrating the dioramas, which they have been particularly applied to the depiction of war scenes (in fact, dioramas are typical in museums dedicated to war, as well as in anthropological ones ―also illustrating famous human killings―). Talking about miniatures and dioramas, with the usual use of these formats, and in the museographic contexts in which they are produced, makes it inevitable to refer to the concept of “natural history of total destruction” coined by W. G. Sebald. We referred to these concomitances (and their transcendence in the order of the dispute over the primacy of universal truth or the truth of concrete things, suggested by Sebald), in the post about the Kluge miniatures [see here], in the following terms: “As for the miniatures understood as a formula at the service of the need to describe total destruction, to which Sebald refers, it is a concept that is formed in the context of the dispute held by some against the idea of that the scientific, the valid, would be the universal, opposing to it the idea that, on the contrary, it is in the concrete example where ideas take force; In this confrontation the miniatures play a transcendental role since they give account of concrete facts, highlighting the incoherences of reality, without the need to resolve this incoherence, as the scientific method demands, because they are developed in the artistic field”.

It also attracts a lot of attention, among the artists who have exhibited in Museari during the last season, Gledys Macías who exhibited in the online museum a video work of his: “Crossdressing is Resisting”. It is a mixture of performative action and a tribute to the victims of homophobia, transphobia… in Ecuador. As Gledys Macías herself points out, it is a combination of “self-representation, file and interpersonal relationships”. A product refined from those axes that define his work, is one of his latest projects: MUME – Museum of LGTBI Memory. 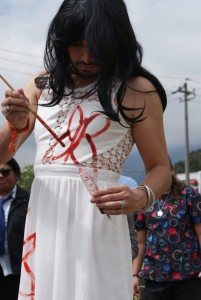 Although, while we are focusing our attention on the formats and resources used in artistic expression, the most unclassifiable of this Museari 2018 is the work of Anna María Staiano. Although for Museari he tried to adapt to the online museum format, his career shows an inescapable will to get out of the frame, both with his personal work and within the team he forms with Graham Bell Tornado “La Errería (House of Bent)”. Body extensions (such as the “body bags” and the “Pussy Alliance Medallions”), and photographic portraits ―expression of photo-actions, performances and participatory actions― are just some indications of his work, because to know his work in reality you have to go see Xàtiva in context (or at least in the artist’s books they publish from time to time).

It affects the same issue Mar Morón, who does not hesitate to affirm: “I have abandoned painting and I pay attention to new media: performance, photography and video. The issues that today disturb and stimulate me have to do with the body, human beings and the conditions of existence in the 21st century”.

The work of Lluís Masià, in particular “Tying the sexes”, stands out for the psychic vein ―between pain and pleasure, that is what the exhibition sheets refer to―, which brings to mind the series of works by Louise Bourgeois of which “Femme Maison” (1974) is a member. 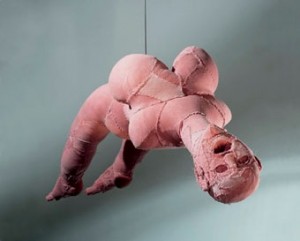 The comment on the works on display could be extended, but it is not the aim to be exhaustive, but to focus on structural issues, in line with the programming of La Posta Foundation.