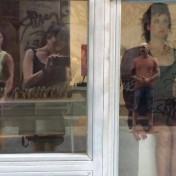 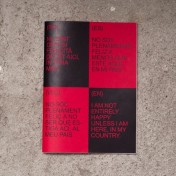 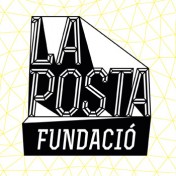 We started the 2015-2016 season with the exhibition Colectives in the white cube. Audiovisual proposals "in the limits" for a changing society. The exhibition was considered as a combination of video-creation, non-fiction cinema and video installation, following the line of work we have called "In the limits", and aims to cross the borders of these labels associated with audiovisual languages to understand the relationship of this medium of expression with both artistic space and society as a whole.

From the third season of "Cinema to come" held in 2015, the project team developed a monitoring process with viewers and spectators who attended the screenings, lectures and workshops this year. This collaborative process has enabled the realization of a number of film pieces that have been exhibited at the La Posta Foundation, within the framework of the project "In the limits" (May-June 2015). Thus, "In the limits (Part 2): Public to come" stated, throughout the month of June, work done by the public "Cinema to come". Or rather by different public.

When you have completed the first season of La Posta Foundation (October 2014 - June 2015) seems time to take stock of what happened. 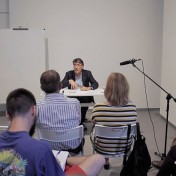 Educational activities have been high throughout the 2014-2015 season, as evident organizing conferences on the occasion of the opening of the exhibition; seminars, etc. In this moment of reflection summer it seems appropriate to give a brief summary of what happened in this section.