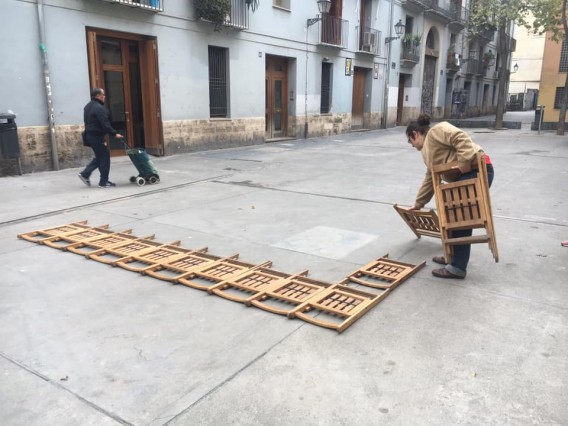 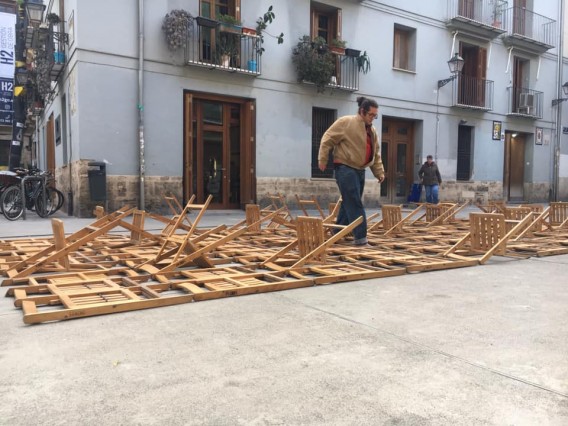 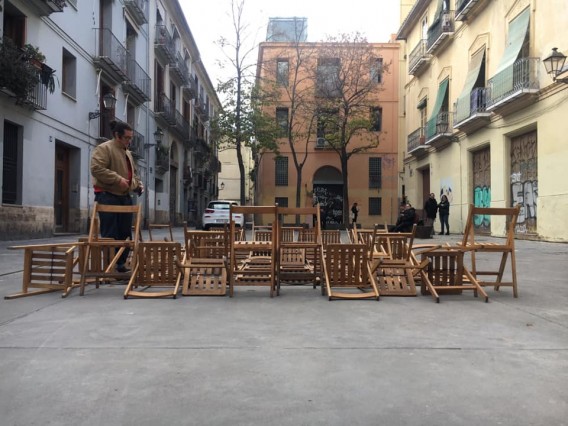 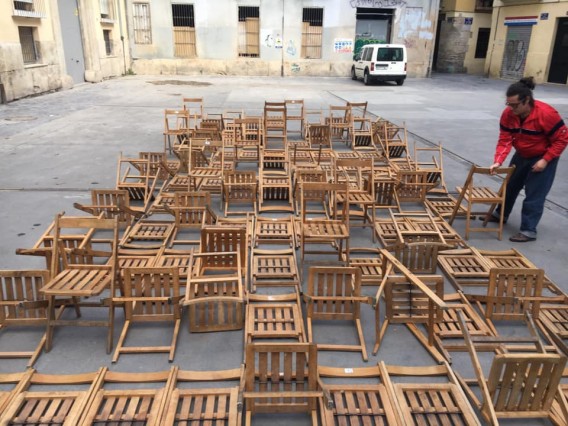 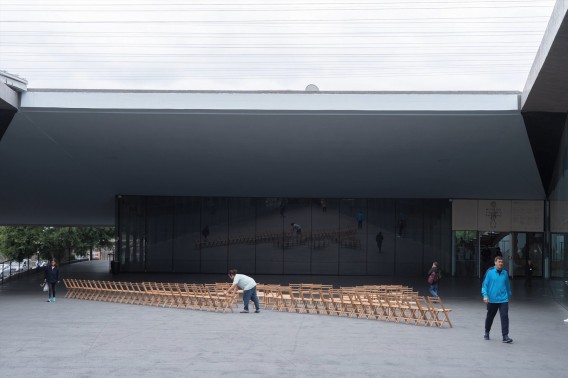 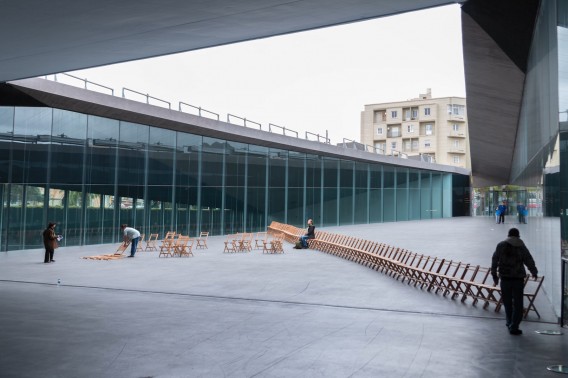 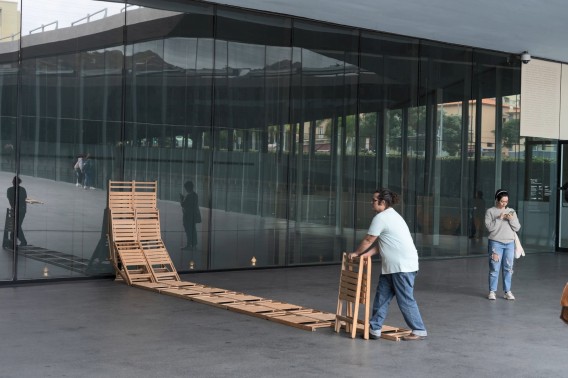 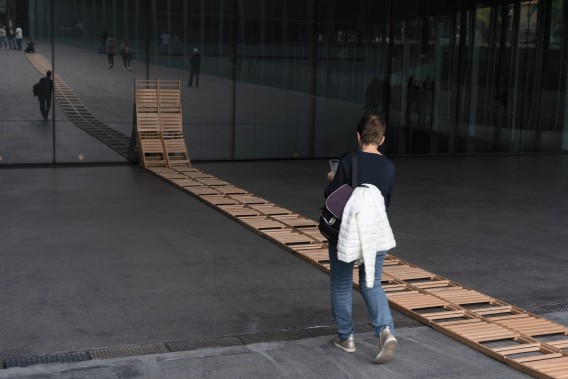 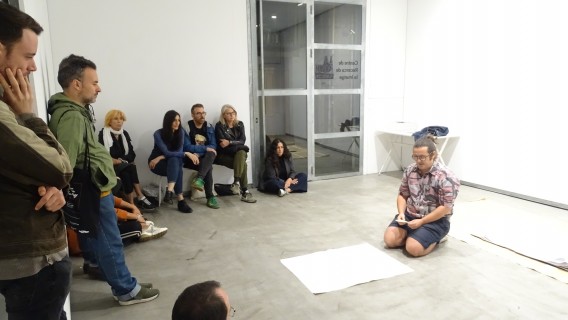 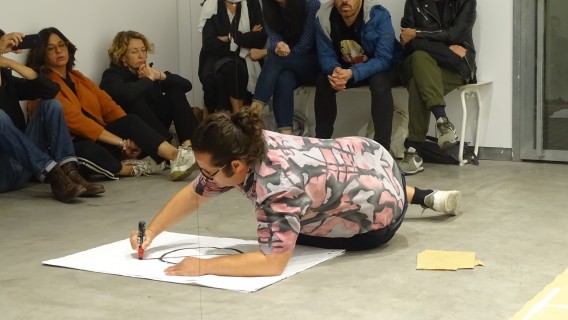 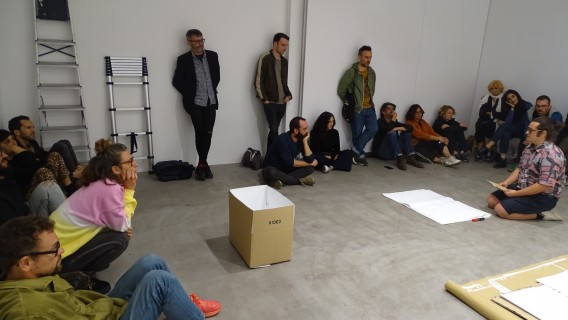 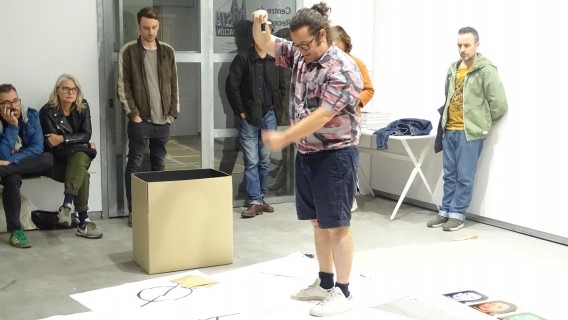 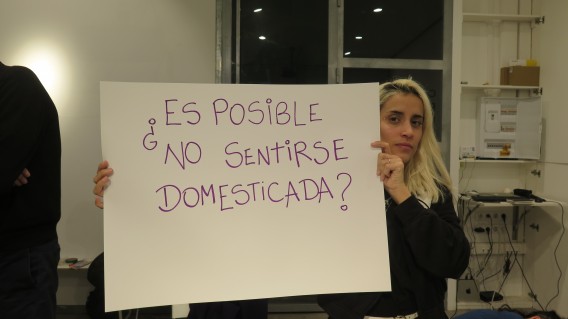 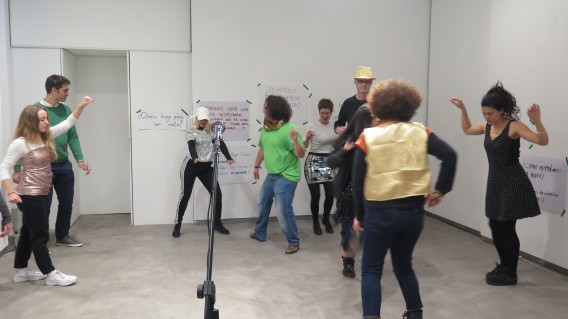 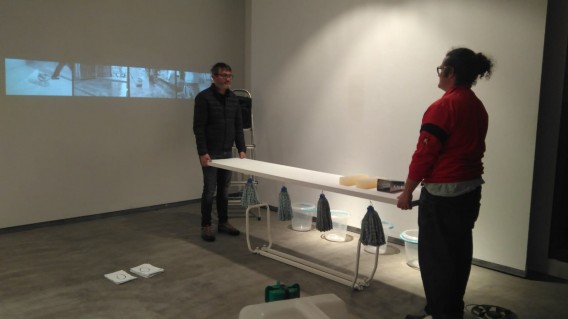 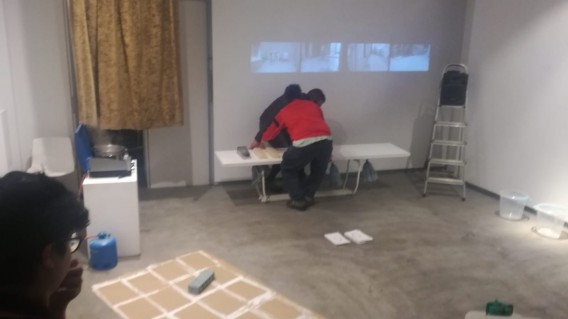 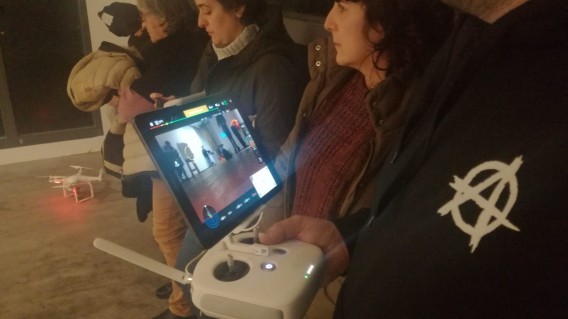 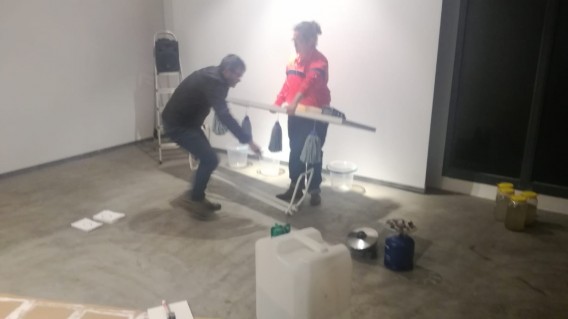 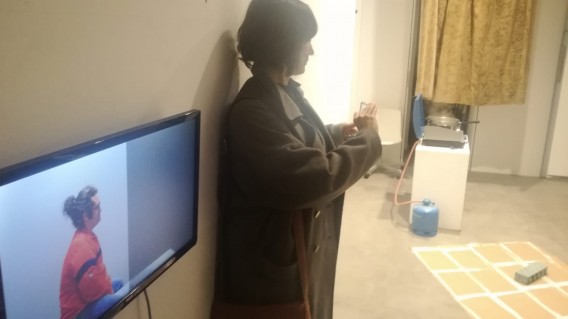 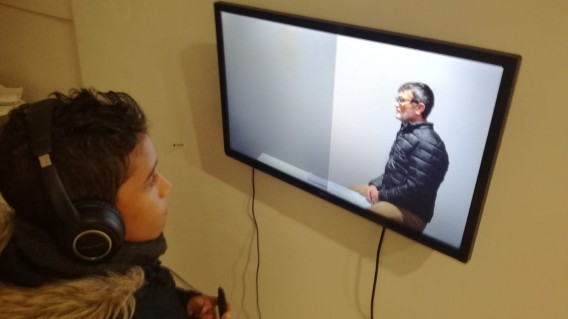 According to history, Leonardo left Milan after losing the favor of the Medicis, and, having been welcomed by King Francisco I of France, crossed the continent going through dangers, circumventing the highwaymen (with his personal and non-transferable pass: The Mona Lisa, painted on a board with pigmented oils ―most of her colleagues continued to paint in tempera or fresco―), until he reached the Clos-Lucé mansion in Amboise (France), where he would spend her final years of life. There he organized large parties, in which he applied ingenuities as stage sets. One of the best known is the great lion that he designed for the king’s coronation parties.

Da Vinci did not leave a written record of the execution of the lion project, but there are some details of the mechanisms he used. With these notes Boaretto Renato, creator expert in mechanical automata, has rebuilt this incredible machine. Boaretto’s lion is manually charged like the mechanism of a winding watch. The lion walks a dozen steps, shakes its head and tail, opens its mouth, and at the end of its performance, pours the flowers from its secret compartment [because the lion has a secret compartment full of flowers]. 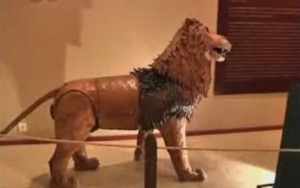 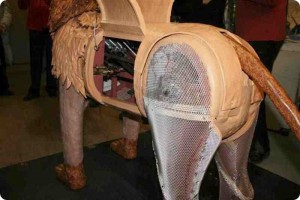 The idea of automata from other eras seems to be present in some of Norberto Llopis’s scenographies for the “Silence” action program, developed within the larger framework of “Variations on the plane” (curated by Ángela Montesinos and Juan Luis Toboso), sponsored by IVAM Produce. That impression was very intense in the second action: “Dis-use”, which took place in the Plaza de la Santa Cruz, in the Carmen neighborhood of Valencia. In this action, a large number of wooden chairs in an open public space, initially folded and arranged in order on the floor, then lose order, begin to configure organic forms, such as microbial growth in a heterogeneous environment and of reduced mobility, then they form a row, like a snake looking to climb the wall.

On the day of the presentation of the series “Silence / Variations on the plane” in La Posta, Norberto gave a lecture-performance in which fragments from another performance could be heard, among other things. From January 1971 until his death in June 1984, Michel Foucault taught at the Collège de France. The classes there are not exactly what is understood by university classes, the most important difference is that the entrance is free, it is not necessary to be enrolled. His classes were packed to the rafters. Where there was a capacity of 300 people 500 entered. A journalist of that time portrayed in Le Nouvel Observateur the atmosphere prevailing in those courses: “When Foucault enters the amphitheater, fast, hasty, like someone who is going to throw himself into the water, he passes by On top of some bodies to get to his chair, he sets aside the recorders to put his papers, takes off his jacket, lights a lamp and starts, going a mile a minute. A strong, effective voice, reproduced by the loudspeakers, the only concession to modernism in a room barely illuminated by the light rising from stucco pylons. […] No oratory effect. It is limpid and tremendously effective. Without the slightest concession to improvisation. Foucault has twelve hours to explain, in a public course, the meaning of his research during the year that has just ended. So he sticks to the max and fills the margins like those correspondents who still have too much to say once they get to the bottom of the page. At 19:15 it stops. Students pounce on his desk. Not to talk to him, but to turn off the recorders. There are no questions. Foucault is alone in the crowd” [Gerard Petitjean, Le Nouvel Observateur, 1975]. On this loneliness to which the journalist refers, Foucault commented: “It would be convenient to be able to discuss what I have stated. Sometimes, when the class was not good, it would take little, a question, to put everything back in its place. But that question never arises. In France, the group effect makes any real discussion impossible. And since there is no return channel, the course is dramatized. I have an actor or acrobat relationship with the people present. And when I finish talking, a feeling of total solitude”. Some of these performance-classes were later transcribed and edited, among others: “Security, Territory, Population”, for the academic year 1977-1978. Norberto has made some extracts from this text. In the lecture-performance in La Posta Norberto says in a meditative voice: “Michel Foucault in «Security, Territory, Population» talks about a change of regime, from a disciplinary regime to a security regime. In a disciplinary regime, the coercive power positively decides what is possible and what is not possible, it is established as an external limit that cannot be overcome, when subverted it is very visible. However, the only security regime that it sets are limits, security limits, a limit that if subverted, the possibility of governability is subverted”. Her words echo in the room in absolute silence. We imagine it invaded by the same feeling of loneliness. 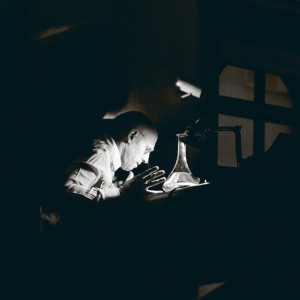 When Bombas Gens Art Center began its journey on July 7, 2017, with the exhibition “Ornament = Crime?”, It did so by questioning a mythical text of Modernity: “Ornament and Crime” by Adolf Loos, which he had put in question the ornament for “primitive, feminine and exotic”; at that time a drift or displacement began from the museum collection of artistic works (in this case, focused on botanical and the representation of autonomous models painting and photography), towards the procedural and theatrical, underlined by the set of activities organized in around this exposition and successive ones (the structure of the reasoning, related to this type of transit, is taken from the analysis that Anna Maria Guasch makes of the transformation processes of art in the mid-sixties of the last century, in particular the transit of minimal to eccentric abstraction ―Louise Bourgeoise, Eva Hesse, Meret Oppenheim, Claes Oldenburg…―): “The procedural and temporal character that took hold of minimalist practice not only affected the relationship between the creator and the work, but also the work / spectator / surrounding space relationships. The work, or the new artistic object, had to be understood as a presence in relation to the surrounding space and at the expense of the viewer’s action / reaction. This meant that, for the first time, the exhibition space was conceived as a globalizing volume in which constant interferences between the works and the observers or spectators of these took place ”; to which must be added the theatrical factor, which Michael Fried, the modern critic of the sixties, strongly evidenced and condemned, since according to him, an art that depends on its situation in space and time is a theatrical art that attempts against the autonomy of the modern work; it is literalistic (in the sense that it refers to real circumstances); not only renounces the basic concepts of modernity, such as those of quality and value, to end up corrupting them, but also contributes to the negation of art [extracted from Anna María Guasch: The last art of the 20th century. From postminimalism to multiculturalism, Alianza Editorial, 2000, pgs. 27-31]. For this reason, it is symptomatic and revealing that the series of actions “Silence / Variations on the plane” was preceded in La Posta by the Dialogue Table “Dance in the Museum”, with the participation of Norberto Llopis himself and Sonia Martínez (Cultural and Educational Activities Coordinator of Bombas Gens Art Center), rapporteur: Álvaro de los Ángeles. Also, the penetration of this order of approaches is observed, in the last programming of Cinema to come, that carried out for the Carme Center (October-December 2018), in particular in a workshop-performance by Sofía Asencio “Bringing the film elsewhere”, a staging that simultaneously highlights the cinematographic and scenic aspects of a specific way of looking that we have described elsewhere as “staged” [see here]; as well as for the TEA Tenerife Fotonoviembre 2019 programming (which has included the reissue of Norberto’s action “Dis-use”, which includes some images in the carousel above). 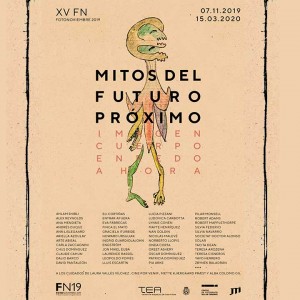 The actions of Paula Valero “Questioning” and Rafael Tormo Cuenca “IP29 incidental opera” have also been part of the series “Silence / Variations on the plane” ―until now―. In the latter, the visual artist Rafael Tormo Cuenca is invited “to think with us about the issues that cross our program. With Rafa there has been a lot of talk about the concept of non-harmlessness under which Agamben describes the horizon we are in regarding the use of objects and spaces. According to the Italian philosopher, objects no longer pass from the territory of the sacred to that of the profane to be used, but have an unprofitable use” (from the action room sheet that took place on January 19, 2020 in La Posta), with which the elements to which we referred before appear again, when dealing with the transition from the minimal to the eccentric abstraction: object, spectator and surrounding space; a surrounding space that in this case is not only physical, because it is also cultural, is the cultural atmosphere that attributes the non-harmlessness to the use attributed to the objects, in this case to subvert it.

Going back to the beginning, it is observed in all this that there is an idea that crosses it meandering, and we see again the organic and mechanical images suggested by the action of Norberto Llopis: microbial growths in a heterogeneous medium with reduced mobility, and snakes looking to climb the wall, and at that moment we know that this has only just begun.